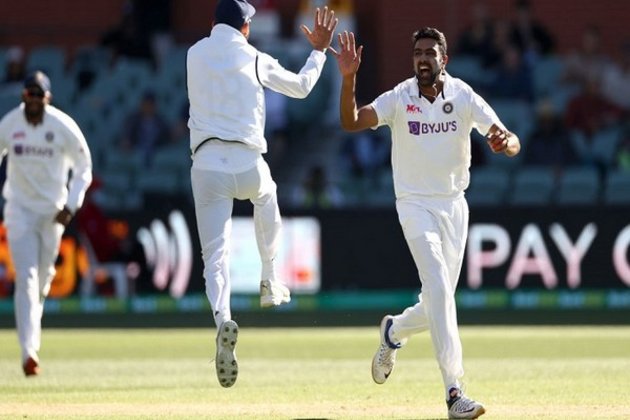 Adelaide [Australia], December 18 (ANI): India's spin spearhead Ravichandran Ashwin feels that while the pink-ball Test is at a "very nascent stage", there is definitely a place for pink-ball Tests on the international calendar.

The senior campaigner didn't get many overs to bowl when India first played a day-night Test in November last year against Bangladesh, but Ashwin was the star of the show at the Adelaide Oval on Friday. He feels that the use of the pink ball in the longest format would need every ground to have the required inventory.

"I still think that pink-ball is at a very nascent stage of where Test cricket should head forward. It is very exciting for a lot of people watching the game. The first Test we played at Eden Garden was a different pink ball and this at Adelaide is a different pink ball, this is Kookubura," Ashwin said during a virtual press conference.

"So Adelaide has hosted the maximum number of day-night Test if I am not wrong in terms of stats. They are five years into the pink-ball Test arena, so I think they have a lot of things going further on how the ball works and how the lights are, etc," he further said.

"I would say it is at a very nascent stage and we are trying too many things in terms of pushing players to the certain brim. I am not really sure but I think there is a place for pink-ball Test surely," he added.

On Thursday, former Australia spinner Shane Warne had called for using the pink ball in all Test matches, citing that the red ball "doesn't do anything" and goes soft after 25 overs.

"I've been saying this for the last few years. I believe the pink ball should be used in all Test matches. Day games, not just day-night games," he had said on Fox Cricket's The Big Break.

"I think the pink ball you can actually see the ball easier, crowd can see the ball easier. It generally does more than the red ball and it looks fantastic on television. So why not use a pink ball the whole time? Maybe change it at 60 overs because it goes soft, but I'd be using the pink ball for every Test match so more of it I would say," he addedFurther highlighting the shortcomings of the red ball, Warne had said: "No more red ball, it doesn't swing, it doesn't do anything, goes soft after 25 overs. It has been pathetic for so long now. Except for the Dukes ball in England, it has been rubbish. The pink ball can't be any worse than what the red ball has been for Test cricket. We haven't seen swing, we haven't seen seam. Absolutely nothing. So let's try the pink ball in Test cricket."India bundled Australia out for 191 after Umesh Yadav, Ashwin and Jasprit Bumrah's heroics with the ball. The visitors were 9/1 in the second essay when the umpires ended play on the second night. The 62-run lead with nine wickets in the bag could prove to be crucial as the wicket isn't getting any better for batting. (ANI)