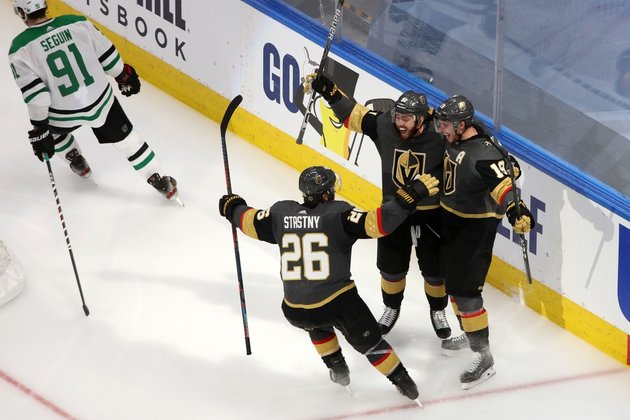 With the Golden Knights playing six of their first eight games and 12 of their first 16 contests on home ice during a shortened 56-game season, Vegas coach Peter DeBoer said it's no secret that his team needs to get off to a quick start to the 2021 season.

The run of home games begins Thursday night against the Anaheim Ducks in Las Vegas.

The Golden Knights, who lost to the Dallas Stars in five games in the Western Conference finals last September in the COVID-19 bubble at Edmonton, open with back-to-back home games against the Ducks followed by two more home dates with Arizona.

In what figures to be a competitive West Division featuring the 2019 Stanley Cup champion St. Louis Blues and the talented Colorado Avalanche, Vegas can't afford to sputter out of the gate.

"Every coach is standing up in front of his group this week and saying we have to get off to a quick start," DeBoer said. "You don't want to get behind early because you run out of time in a short season like this to catch up."

The Golden Knights lost to the Washington Capitals in the 2018 Stanley Cup Final in their inaugural storybook season. They followed that up by blowing a 3-1 lead to San Jose in the first round in 2019, then barely made it past Thatcher Demko and the Vancouver Canucks in a nail-biting, seven-game, second-round matchup last season. Vegas subsequently managed just one win against the Stars in the Western Conference finals.

Vegas signed highly coveted defenseman Alex Pietrangelo to a seven-year free agent contract, with an average annual value of $8.8 million, to try to steady a leaky defense. The Knights, surprisingly, also held onto both of their high-priced goalies, Robin Lehner, who inked a five-year, $25 million deal, and popular Marc-Andre Fleury, who has two years remaining at $7 million per season.

"The expectation here is definitely to win the Stanley Cup," said Lehner, who had a league-high four shutouts to go along with a 9-7 record and 1.99 goals-against average and a .917 save percentage in the 2020 playoffs. "Everything else is really disappointing. We feel good about it. It's a good pressure to have. We have a good team. Hopefully we can go all the way."

DeBoer wouldn't name his starting goaltender following the team's Wednesday morning practice but said his starter had been notified.

Rebuilding Anaheim has missed the playoffs each of the past two seasons and finished sixth in the Pacific last season with 67 points, 19 fewer than the Golden Knights. Because they failed to qualify for the playoffs, the Ducks haven't played a game since March 11 -- a stretch of 309 days -- when they lost 4-2 to the Blues. Vegas, meanwhile, last played on Sept. 14.

Anaheim lured free agent defenseman Kevin Shattenkirk away from the defending Stanley Cup champ Tampa Bay Lightning with a three-year, $11.7 million contract. The Ducks also have emerging stars in 19-year-old forward Trevor Zegras, the leading scorer and MVP for the gold-medal winning Team USA in last week's World Junior Championships in Edmonton, as well as 18-year-old defenseman Jamie Drysdale from Team Canada. But both Zegras and Drysdale will begin the season playing for San Diego in the AHL.

All-Star goaltender John Gibson said the Ducks' goal is to finish in the top four in the West Division to snap their playoff drought.

"As long as we make the playoffs, we can go on a run," Gibson said, according to the Orange County Register. "You get in the playoffs and you just get a chance to play. Who knows what's going to happen?"

Vegas won three of the four meetings with Anaheim last season, outscoring the Ducks 19-13 in the process.