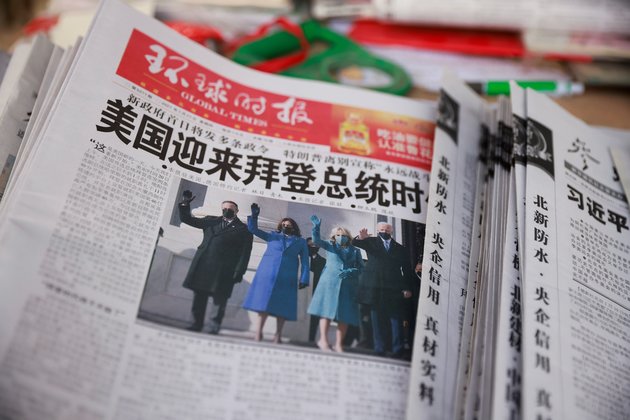 China is gearing up to deal with a new U.S. administration after a particularly difficult year during which it suffered a series of diplomatic setbacks owing to COVID-19, trade war and human rights issues. A question being widely asked is whether Chinese President Xi Jinping will get along better with President Joe Biden than he did with former President Donald Trump.

Most analysts say Biden will be in no hurry to undo many Trump administration China decisions but that he is more likely to focus on human rights and strategic issues than trying to make life more difficult for Chinese business.

"There is a bipartisan consensus in Washington to be tough on China," said Zhiqun Zhu, head of the international relations department at Bucknell University.

The Trump administration announced a flurry of restrictions and penalties against China during its last few months making it politically impossible or technically difficult for the incoming administration to roll them back, Scott Kennedy, of the Center for Strategic and International Studies in Washington, said.

Antony Blinken, Biden's nominee to be secretary of state, has said he agrees with his predecessor, Mike Pompeo, about the need to be tough on China.

"I think we should be looking at making sure that we are not importing products that are made with forced labor from Xinjiang ... we need to make sure that we're also not exporting technologies and tools that could be used to further their repression. That's one place to start," he said.

There are other key issues that will likely affect U.S.-China relations.

Chinese leaders do not wish to be seen as doing Washington's bidding on what they consider sensitive and "core issues" such as the situations in Taiwan, Xinjiang, Tibet and issues such as human rights, according to a Chinese analyst who does wish to be named. As Blinken's comment suggests, the Democrats in the new administration are likely to raise these issues emphatically, resulting in some friction with Beijing.

Despite the political difficulty in rolling back measures against China, the Biden administration cannot avoid the realistic assessment that more than three years of trade war has done little to damage Chinese trade, though it may have caused problems for American consumers.

A man stands in front of a copy of the Global Times newspaper featuring an image of the U.S. Capitol during preparation for the inauguration of Joe Biden as the U.S. president, which is placed on a public display window in Beijing, Jan. 21, 2021.

"The full burden of the Section 301 tariffs, most of which are still in place, has been borne by U.S. importers and consumers, not Chinese exporters," Kennedy said referring to a legal provision that allows the government to impose trade restrictions on foreign countries.

There are some areas where the two countries can try to mend relationship.

"I expect the Biden administration may be willing to relax some restrictions, for example on tariffs or journalists, but only if China reciprocates and addresses problems which created the problems in the first place," Kennedy said.

Zhiqun Zhu lists some "low hanging fruits" such as resuming Fulbright programs in China and Hong Kong, a more welcoming policy toward Chinese students and scholars, return of Peace Corps to China, and possibly reopening U.S. Consulate in Chengdu and Chinese Consulate in Houston.

For its part, China would try to avoid major confrontation with the United States because it suffered some serious reverses in the diplomatic field in 2020.

"Covid-19 indeed hurt China's image. Many countries still blame China for not being transparent and not doing enough early to curb the spread of the virus," Zhiqun Zhu said. At the same time, China scored some diplomatic success with a trade agreement with the European Union and in joining the Regional Comprehensive Economic Partnership, a trade treaty involving 15 countries, he said.

Kennedy thinks both the United States and China have suffered losses to their reputations in 2020.

"China suffered a setback because of the pandemic, the mounting repression in Xinjiang and Hong Kong, and its wolf-warrior diplomatic style. My sense is that China's behavior, not external criticism, was the core reason for China's problems in 2020. They were self-inflicted," he said.

China is now trying to make up for some of the loss in reputation by exporting COVID-19 vaccines to several countries who need them. However, vaccines manufactured by Chinese companies have not gained worldwide acceptance, which is affecting Beijing's efforts to distribute them.

"Given the apparent lower level of effectiveness of the Chinese vaccine, there's a big question about how much demand there will be for it, not just around the world, but within China as well," said Kennedy.