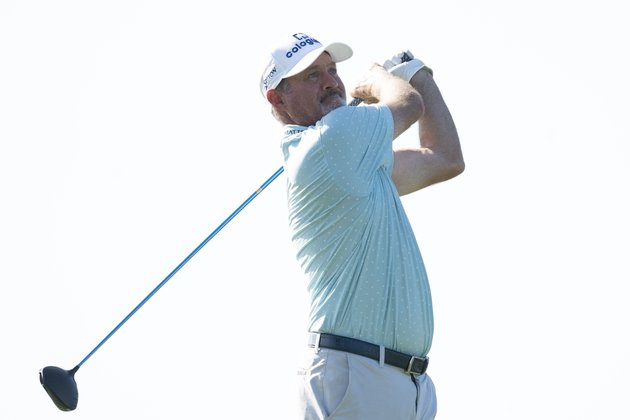 Jerry Kelly birdied the 18th hole Friday, and he shares the lead with Northern Ireland's Darren Clarke after the second round of the Mitsubishi Electric Championship at Hualalai.

First-round leader Retief Goosen of South Africa carded a 71 on Friday, and he holds third place at 11 under.

Fred Couples (second-round 63) and Kevin Sutherland (68) are tied for fourth at 10 under.

Kelly credited his familiarity with the course in helping him deal with windy conditions.

"I've played every one these holes from every direction you can possibly imagine," he said. "I've been coming here for a really long time, longer than I've been 50, let's put it that way. Yeah, I'm very comfortable with this golf course. Hey, they play tougher when it's windy, but there's still ways to play them."

Clarke was even par for the day through the front nine before an eventful back nine. He birdied No. 10, bogeyed No. 11, then strung together four consecutive birdies before finishing with three pars.

"I just didn't really have it today, to be honest with you," Clarke said. "Goose played really, really nicely and he just struggled on the greens a bit. He just had a tough day on the greens. He was playing nicely. So I was just trying to hang on a little bit, and then hit a few better shots on the back nine obviously. Holed a couple putts as well."

Clarke, 52, is seeking back-to-back victories after claiming the TimberTech Championship in November in his most recent Champions outing. It was his first win on the over-60 tour.

"I've been in this position a lot, so yes, TimberTech was nice," Clarke said. "Go out there (Saturday) and play as best I can. If that's good enough to win, then there will be a few alcoholic beverages again (Sunday) night."