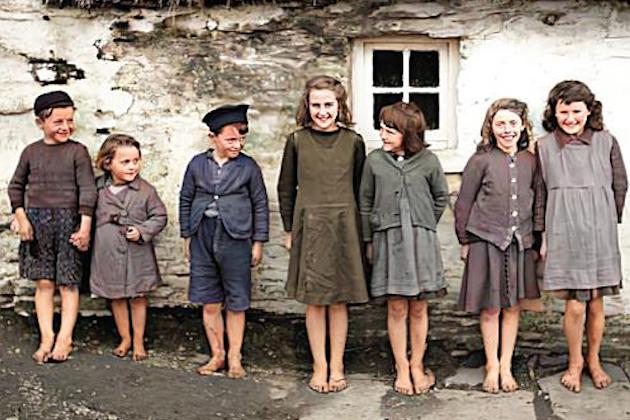 GALWAY, Ireland: Two professors in Ireland are bringing to life photos of the people and long-ago villages of Ireland using digital technology.

Professors John Breslin and Sarah-Anne Buckley at the National University of Ireland in Galway have painstakingly taken photos of Irish life dating back to 1840 and accurately added the appropriate colors to let the public see that earlier world, just as those living then saw it.

The photo collection covers centuries of Irish life, as well as offering shots of celebrities, such as Oscar Wilde and poet W.B. Yeats.

The pictures cover a wide array of village life, with poor families struggling to make a living and the sight of their shoe-less children, as well as upper class city families.

"There were many different social classes in Ireland, as in many countries, so I think it's important to show the full range," said Breslin, as reported by CNN.

"We have a mixture of the wealthier classes and the gentry, and then you've got people who are just trying to survive and gather water and turf (peat) to burn on their fires."

The project, named "Old Ireland in Colour," has tens of thousands of social media followers, and a book being sold under the same name.

The collection also features pictures from the Irish revolutionary period of the 1910s to 1923.
Breslin recounted learning to use an AI-powered colorization tool, DeOldify, as he sought to bring to life old family pictures.

From there, he applied the same techniques to photos from archives and libraries throughout Ireland.

The AI tools learns which colors to apply to black and white images. "So, for example, the grass or trees or the sea -- it knows from those textures and shapes that they should be green or blue," said Breslin.

But it took more than computers to ensure colors were accurately portrayed. Buckley, an expert on Irish social history, along with Breslin, researched the original colors of clothing and pigments available in Ireland at the time.

Breslin said he hoped the colorization will introduce people who normally are not interested in Irish history. In fact, the book has become a best seller in Ireland,

"It's important to be able to relate more to our history, and colorization definitely makes things more relatable," added Breslin.