John Tavares out as Leafs try to draw even vs. Habs 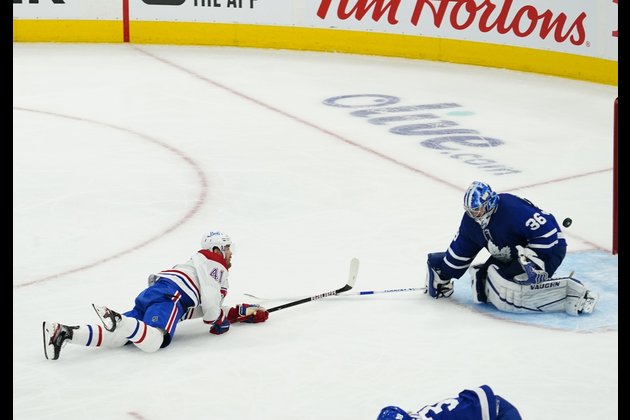 The Toronto Maple Leafs will be without captain John Tavares when they try to draw even in their first-round, best-of-seven playoff series Saturday night against the visiting Montreal Canadiens.

Tavares has been ruled out for "indefinitely" after he took an accidental Corey Perry knee to the headfollowing a hit by Ben Chiarot in the first period of Montreal's 2-1 Game 1 victory on Thursday night.

Tavares left the ice on a stretcher. He was released from hospital Friday morning.

"He was assessed by the neurosurgical team at St. Michael's Hospital and the club's medical director," a team statement said. "He was kept overnight for observation and is now resting at home under the care and supervision of team physicians."

Nylander scored Toronto's only goal on Thursday, drawing the Leafs level in the second period. Galchenyuk did not play in Game 1.

Perry said that he felt sick to his stomach about the injury to Tavares.

"He got hit and I was coming in the (neutral) zone," Perry said. "I tried to jump over him and, unfortunately, I caught my knee on his head. I don't know what else to do there.

"I tried to jump, and it was an unfortunate incident. I know Johnny pretty well and I just hope he's OK."

As Tavares was being removed from the ice on the stretcher, Perry skated over to him.

"I've played with John a few times," Perry said. "The Olympics, the World Cup here in Toronto. I went over and just gave him a little pat on the pants and said: 'Get better.' ... I'll reach out to him and make sure he's doing all right."

"That's a big loss for us, but we've got lots of depth," Keefe said. "All our guys are just going to have to play better. It's a big loss; it's our captain. Good teams overcome these types of things, and that's going to be on us here now."

Paul Byron scored the game-winning goal for the Canadiens at 12:44 of the third period while Montreal was killing a penalty.

"I thought our power play early in the game was really good, looked really dangerous," Keefe said, "but we needed one to go in for us, obviously. It's a big difference in the game."

Byron had been put on waivers three times this season as a salary-cap move. The 32-year-old left winger made the Canadiens glad there were no takers when he scored a superb goal.

Byron skated past Rasmus Sandin in a race for a loose puck at the Toronto blue line and was tripped by the defenseman as he drove to the net. While sliding on his knees, Byron took the puck from his backhand to his forehand and chipped it over goaltender Jack Campbell.

"He has a lot of heart," said Josh Anderson, who scored for Montreal in the first period. "He's been through a lot this year. He's a really, really hard-working guy on and off the ice. He doesn't really show that he's defeated in any way. He just comes to the rink each and every day and puts in the hard work.

"So it was really nice to see him get rewarded (Thursday), and he played amazing for us."