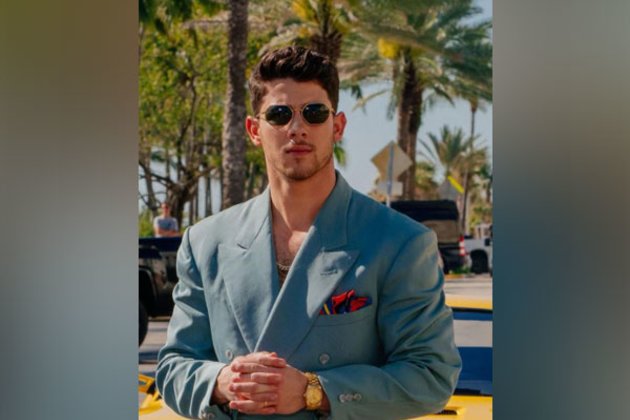 Washington [US], May 22 (ANI): Singer-actor Nick Jonas, who is set to host the Billboard Music Awards 2021, opened up about the upcoming ceremony. The star shared that he and the producers have turned the challenges raised by the COVID-19 pandemic into an opportunity to create a unique awards show.

Speaking to The Hollywood Reporter about the ceremony, Nick said, "Because of some of the obstacles that are just naturally there because of COVID and other things, we've had to think outside the box and we view this as an opportunity to bring a really unique show to the table."He added, "We're working closely with the production, the design team, the producers to build a show that feels really different, feels special, that we can look back on in 10 years and go, 'Wow what an amazing moment in time that was.'"Nick added that the ceremony will feature 500-600 people in the audience -- which, it should be noted, is seemingly one of the largest audiences for a Hollywood awards show amid the pandemic thus far that features regular folks.

The Golden Globes audience was filled with healthcare workers, while the Grammys and Oscars kept invitations to industry folks.

But Nick said that NBC and the producers at Dick Clark Productions are taking every precaution to ensure safety. He added that it is a welcome return to things starting to feel "normal" again.

"I think as performers, we thrive on the interaction with the crowd and not having that for a year and a half has been tough," he said.

For his part, Nick said he has been involved with the BBMAs over the years as a presenter, performer and nominee and it took about "two seconds" for him to say yes after he was asked to host.

"I've always loved this show because it really is just a celebration of a great year in music, and in my opinion it's artist-centric, which is great," he said.

Nick added, "I'm just thrilled to be part of a show that is going to be unique because of the COVID part of it all and the precautions and I think that's going to make it even more special."The 'Sucker' hitmaker was tight-lipped about the specifics but added that everyone involved will be working right up to airtime to put together what he hopes will be a memorable telecast.

"I can't give away too many surprises. This is all about keeping the mystique alive. But we want to bring a great show to the fans, both as a host, the other performers and artists who'll be there," he said.

That includes Nick himself taking the stage with his brothers, Joe and Kevin Jonas, aka the Jonas Brothers, along with Marshmello, who released a single together, 'Leave Before You Love Me', on Thursday.

For his part, Nick is looking forward to seeing the performers.

"I think everyone is looking forward to seeing The Weeknd perform. It'll be nice to see him on an awards how stage," Nick said of the singer, who was snubbed at this year's Grammys and has said he'll boycott future Grammy shows until the Recording Academy overhauls what he calls its "corrupt" voting process.

Heading into the show, The Weeknd leads all finalists with 16 nods. The finalists and winners are based on key fan interactions with music, including audio and video streaming, album and digital song sales, radio airplay and social engagement, tracked by Billboard and its data partners, including MRC Data and Next Big Sound.

The BBMAs will broadcast live on Sunday from the Microsoft Theater in Los Angeles on NBC. (ANI)