Oilers' stars look to get loose in Game 3 vs. Jets 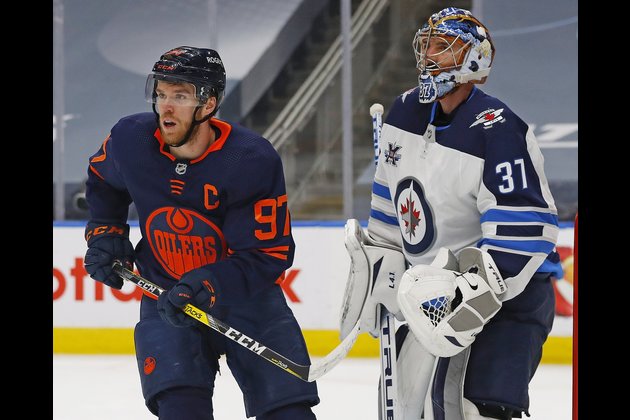 The Edmonton Oilers have done nothing so far in the playoffs to disprove the theory they can't win without production from Connor McDavid.

Heading into Sunday's road clash with the Winnipeg Jets, the Oilers trail the opening-round playoff series 2-0, and McDavid and Leon Draisaitl -- who finishedone-two in the league's point race during the regular season -- have been blanked by a Jets squad that followed up a 4-1 victory in the opener with a 1-0 overtime win on Friday.

As much as it's a team game, Edmonton's best hope for getting back into the best-of-seven series requires McDavid and Draisaitl finding their mark.

Game 4 of the series will be Monday.

McDavid, who racked up 105 points in the 56-game regular season, including 22 in nine clashes with the Jets, was held without a point in consecutive games during one stretch during the regular season, a three-game spell in late-February and early-March.

As well as the Jets have defended, and goaltender Connor Hellebuyck has performed, the Oilers -- especially their dynamic duo -- aren't forcing their chances.

"You got to earn your breaks. We're not sitting here crying that we're not getting breaks," Oilers coach Dave Tippett said. "They've scored two goals off of deflections. ... They've got those goals and we haven't, but we still have to work to get those goals. We're not sitting here thinking everything is alright. There are things we can do to help earn those breaks."

The Jets may be in the driver's seat, but they are well aware NHL playoff history is filled with teams who have recovered after losing the first two games of a series on home ice.

"We still have a ways to go in the series," forward Andrew Copp said. "Early in my career, whenever you won a game in the playoffs it felt like you were going to win the Stanley Cup. Whenever you lost a game in playoffs, it was like the world was ending. Now, (I'm) a little bit more level-headed."

Even so, the Jets can take pride in being full marks for the two victories they've earned to kick off the Stanley Cup playoffs. They've done a masterful job defending Edmonton's game-changers and Hellebuyck has been outstanding.

"They're creating chances. They're making plays. I think we've just got to try to not give them chances. That's the biggest thing, the chances they create, they're working for," captain Blake Wheeler said of McDavid and Draisaitl. "We're just trying to make them work for the chances. With that being said, they're still creating chances. They're still so dynamic. At end of the day, Helly made some big saves when we needed to win."

Playing strong defensively isn't easy, especially when up against players who can change the momentum in a heartbeat, but the Jets have been rewarded for those efforts.

"Winning a couple games helps that continue. This series, as all do, will continue to change," Winnipeg coach Paul Maurice said. "This game is not going look like the last two. They're going to have a different risk profile in their game. They'll become more dangerous as it goes. As we get closer and closer to Game 7, that's the way the series is going to go."