Biden Seeks to Blow Away Doubts About Wind Power 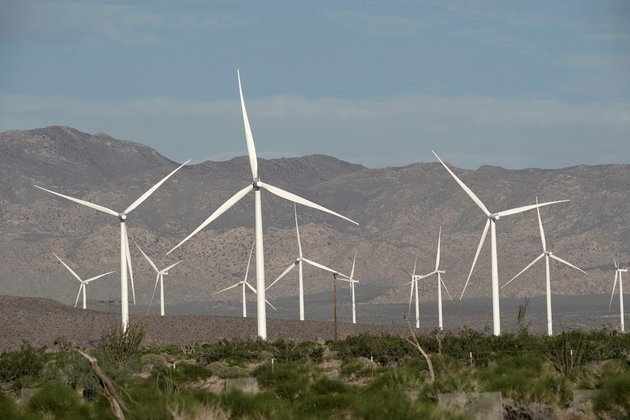 WASHINGTON - For promoters of wind energy, the change in direction expressed by the current U.S. administration is a refreshing breeze.

FILE - In this April 23, 2021, file photo, Interior Secretary Deb Haaland speaks during a news briefing at the White House in Washington.

"It's an announcement that will set the stage for the long-term development of clean energy and the growth of a brand new made-in-America industry," said McCarthy.

"We've been working on this for years and years and years," Newsom told reporters on a conference call with the government officials, calling development of offshore wind projects one of California's "top priorities" and a "visionary opportunity" to transition away from nuclear power.

The initial areas for offshore wind development in the Pacific Ocean potentially could bring as much as 4.6 gigawatts of clean energy to the grid, enough to power 1.6 million American homes, according to McCarthy, who said "the Department of Defense is doing more than its fair share to help us fight the climate crisis."

Because the U.S. military conducts testing, training and operations off the California coast, the Pentagon played a critical role in identifying the new areas for offshore wind development, according to officials.

"It's our view that the world faces a grave and growing climate crisis. Climate change is both a threat to the Department of Defense's operations around the world and an existential challenge to our ability to maintain resilience here at home," Kahl told reporters on a conference call. "The Defense Department is committed to working across the U.S. government to find creative solutions that both preserve this military readiness while also facilitating sustainable climate pathways that are essential to our national security."

There are currently about 69,000 wind turbines in the United States, almost all of them onshore in rural areas, according to the U.S. Geological Survey.

Wind power in the United States, with a current installed capacity of about 122 gigawatts, surpassed hydroelectric in 2019 as the main renewable source of electricity generation and is responsible for producing 8.5% of net generation in the country, according to U.S. Energy Information Administration.

Offshore wind farms, however, are a recent innovation in North America. The first operational unit at utility scale was completed just five years ago off the coast of the state of Rhode Island. The Block Island Wind Farm is comprised of five turbines, each producing six megawatts of power.

The developers of another wind farm in that state will decrease the number of turbines from 15 to 12 at the request of coastal regulators desiring to minimize disruption to the marine environment and the fishing industry.

The Danish company Ørsted and its partner, Eversource Energy, will instead use more powerful individual turbines, according to The Providence Journal newspaper.

Offshore units are more efficient because wind speeds tend to be faster and steadier than on land, and even small increases in speed yield large increases in energy production. But they are expensive and difficult to construct and maintain. Some environmentalists also are concerned about the effects of offshore wind farms on marine animals and other wildlife, which are not well understood.

Before and during his four-year presidency, Trump made mostly wild, unfounded claims about "windmills" harming property values and that "the noise causes cancer." He also dismissed it as a viable alternative energy source because "if the wind doesn't blow, you can forget about (watching) television at night."

Wind farms generate most of their energy at night but, determining how to store what they produce for use during daytime peak demand remains a technical challenge. Solutions being researched include sodium-sulfur and lithium-ion batteries, as well as flywheels and underground caverns of compressed air.

"We spent the past few years getting nowhere" in terms of environmental justice, prior to the Biden administration taking office, Newsom said, explaining that the offshore turbines "would not impact diverse communities" but rather benefit them.

The projects in California, the nation's most populous, are likely to be buffeted by some opposition in a state where residents and special interest groups have a reputation for being particularly litigious when it comes to new infrastructure projects, on or offshore.

The state plans in an unprecedented manner to fast-track its environmental review process for the new wind farms.

"We value process but not the paralysis of a process that takes years and years and years that could be done in a much more focused way," Newsom told reporters when asked why there should not be a substantial environmental review.

Meanwhile, some who live near big wind installations on the U.S. East Coast do not like the towering turbines and have gone to court to oppose them. Residents in the state of Massachusetts filed lawsuits blaming noise and flickering light from the facilities for a variety of medical ailments, including headaches, tinnitus, insomnia and dizziness. The legal battles continue.

Fishermen in numerous coastal communities have opposed the planned offshore wind turbines, contending they would interfere with fishing routes and harm catches of commercial species.

Despite the concerns, the offshore wind industry has the potential "to create tens of thousands of family-supporting and good-paying union jobs in the clean energy economy," Haaland told reporters on Tuesday.