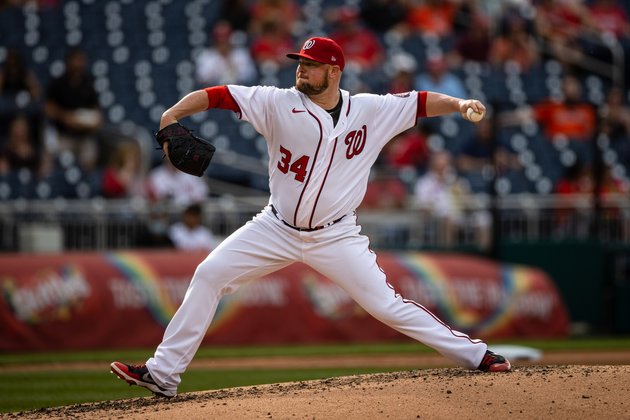 When the Washington Nationals host the Milwaukee Brewers on Friday night to open a three-game series, it will be the Brewers' first game in Washington since the 2019 National League wild-card game.

The Nationals rallied for a 4-3 victory that night, which sparked a run to their first World Serieschampionship.

Washington lost two of three vs. the Cincinnati Reds this week, splitting a doubleheader on Thursday. Jon Lester (0-2, 5.33 ERA), who is 5-4 with a 3.09 ERA in 13 career starts against the Brewers, will be on the mound Friday.

Lester lasted only four innings in his most recent start, Saturday against the Baltimore Orioles. He gave up six runs on five hits, including a home run, and three walks.

"Just try to make the most out of it," Lester said. "Try to tell yourself as much as you can that it's 0-0 the next inning and kind of start over. It's all you can really do. You can't quit."

Lester, a five-time All-Star, has given up 11 earned runs and four home runs in his past two starts.

But, in each of them, Lester managed to stay in the game after a rough early inning and preserve the Nationals' bullpen usage. He gave up five runs in the first inning against Baltimore but hung in there for three more innings.

The Brewers will start lefty Brett Anderson (2-3, 4.34), who will pitch for the first time at Nationals Park.

In his most recent start, last Saturday in Cincinnati, Anderson gave up two runs on four hits, including two home runs, over five innings. He struck out three and walked no one.

Anderson lost his only start ever against the Nationals, allowing seven runs on 10 hits and three walks over five innings.

The Brewers are coming off a four-game split with the San Diego Padres.

Jackie Bradley Jr.'s walk-off hit off the right-field wall in the bottom of the 10th inning lifted Milwaukee to a 6-5 win over San Diego on Thursday.

It was also a welcome sign for the veteran, who hasn't been himself at the plate so far this season.

"My performance has been abysmal, and there's no excuse for it," Bradley said. "But I'm going to continue to come in every single day, put the work in and kind of let the chips fall where they may."

Bradley has struggled in his first season in Milwaukee, hitting just .157 in 153 at-bats.

"It's been frustrating for him, for sure," Brewers manager Craig Counsell said. "But, look, moments of success and being the hero on a day like this, it lets you sleep easier and it puts a smile on your face."

Reliever Tanner Rainey was activated from the COVID-19 injured list Thursday and gave up three runs without recording an out in the first game of the doubleheader against the Reds. Kyle McGowin was optioned to Triple-A Rochester.