Cubs on a roll as Reds come to town 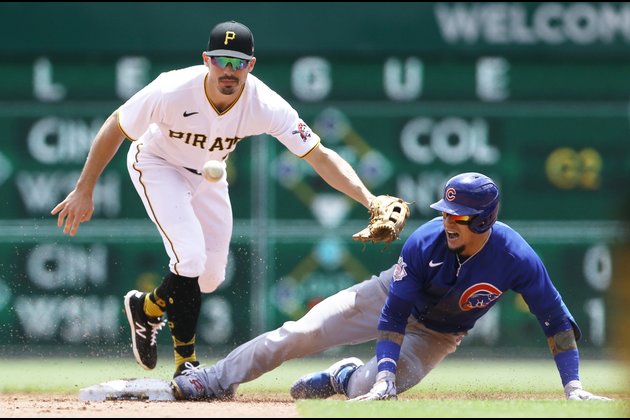 The Chicago Cubs look to continue their recent run of success when they open a three-game series against the visiting Cincinnati Reds on Friday afternoon.

Chicago has won four straight games and nine of its past 11 and is suddenly batting the St. Louis Cardinals for the National League Central lead.

The Cubs are 16-9 at home entering a matinee game against a Cincinnati squad that had to travel late Thursday from the nation's capital. The Reds lost the completion of a suspended game 5-3 to the Washington Nationals on Thursday afternoon before winning the regularly scheduled game 3-0 in the evening.

Cincinnati took two of three from the Nationals after losing six of the previous seven games.

This the teams' second meeting of the season. The Reds won two of three at home against the Cubs from April 30-May 2.

Chicago's Javier Baez went 4-for-13 with a homer, four RBIs and a stolen base during that series. On Thursday, he was hitless in four at-bats but fueled the Cubs' 5-3 victory over the Pittsburgh Pirates with a stunning baserunning maneuver.

Baez hit a seemingly inning-ending grounder in the third inning with catcher Willson Contreras on second. However, the throw from Pirates third baseman Erik Gonzalez was wide, and first baseman Will Craig was off the base when he caught the ball.

Craig could have stepped on first to end the inning. Meanwhile, Baez decided to backtrack toward home plate and Craig surprisingly chased him in pursuit. As Baez was nearing home, Contreras was heading toward the plate and Craig frantically tossed the ball late to catcher Michael Perez as Contreras slid in safely.

Baez then took off toward first, the throw by Perez went into right field and the Chicago shortstop ended up at second. Ian Happ followed with an RBI single to give the Cubs a second run they shouldn't have scored.

"Let's say I improvise," Baez said. "At the moment, I can react pretty fast to things like contact and stuff like that. But I'm pretty good at tagging and not letting people tag me."

Chicago manager David Ross, a teammate of Baez on the franchise's 2016 World Series championship team, has long been impressed with the mental side of Baez's game.

"He has just this way about him that, whether you call it swag or baseball IQ. He plays a game like a kid," Ross said. "I think that's why a lot of people fall in love with him."

Meanwhile, Cincinnati's Eugenio Suarez hit two homers in the series against Washington to raise his season total to 11. He is third on the team behind Jesse Winker (13) and Nick Castellanos (12).

"It was a big win for us," Winker said after the Reds' 3-0 triumph Thursday. "We're just out here trying to help the team win and play some baseball; that's really it. There's so much that's out of our control, so you just try to come here and help the team win any way you can."

Cincinnati right-hander Vladimir Gutierrez is slated to be recalled from Triple-A Louisville to make his major league debut Friday.

The 25-year-old Cuba native went 2-0 with a 2.65 ERA in three starts at Louisville. He allowed nine hits and seven walks while striking out 21 in 17 innings.

Right-hander Adbert Alzolay (2-4, 4.30 ERA) will be on the mound for Chicago. The 26-year-old has struck out 45 and walked just seven in 44 innings over eight starts.

Alzolay lost to the St. Louis Cardinals in his last outing, giving up two runs and five hits over seven innings. He has a 5.79 ERA in two career appearances (one start) vs. the Reds.

Cubs first baseman Anthony Rizzo (back) is questionable after missing the past two games.