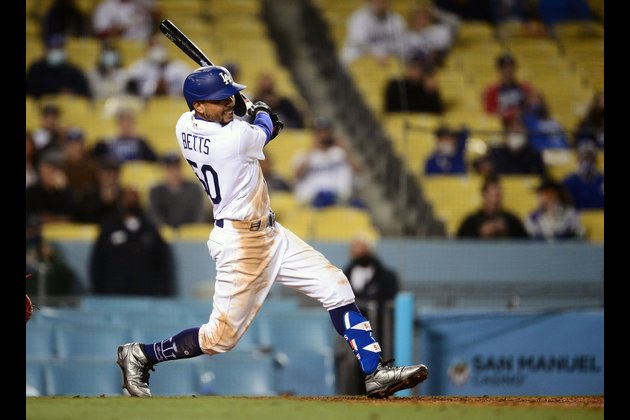 Los Angeles Dodgers leadoff man Mookie Betts will gladly turn the page to June after a May that went so badly off the rails, he missed a game over the weekend with an allergic reaction of unknown origin.

Betts gave glimpses of a turnaround Monday, reaching base four times in a 9-4 victory over the St. Louis Cardinals. He is expected to be in right field and batting first as the Dodgers host the Cardinals on Tuesday in the second game of the series.

"He took five (plate appearances Monday) and you could see they were really good at-bats," Dodgers manager Dave Roberts said. "You can see that when he goes, our guys have a way of following."

Second in National League MVP voting last season, Betts has not looked anything like the player who helped bring a World Series title to Los Angeles for the first time in 32 years.

Heading in to Monday's series opener, Betts was batting just .230 in May, and while he did have three home runs, he had a .794 OPS that was well under his .890 career mark.

Betts did miss a pair of games in the month with left shoulder discomfort, but he has refused to say health has been an issue.

"I've shown that I can play at those expectations and kind of live by them," said Betts, who is batting .247 with five home runs and 18 RBIs. "I'm not mad at it by any means. I don't mind expectations. It doesn't scare me at all."

It's not like June has always been the best to Betts. His .840 career OPS is his lowest in any month of the season.

He does get better as the season progresses, with August and September traditionally his most productive. The Dodgers hope the tide turns before then.

The club knows it can lean on its pitching in the interim. The Dodgers entered play Monday with a 3.20 ERA, third best in baseball. On Tuesday, Los Angeles will try a bullpen game at least one more time through the rotation.

Veteran left-hander David Price (1-0, 3.31 ERA) will start, having given the team 4 2/3 scoreless innings the last two times he started amid the bullpen strategy. He retired all eight batters he faced Thursday against the San Francisco Giants.

Price has just one career start against the Cardinals. It came in 2015 when he was pitching for the Tigers in 2015. He gave up three runs on seven hits in 6 2/3 innings, with two walks and nine strikeouts, and he came away with a no-decision.

The Cardinals will send right-hander John Gant (4-3, 1.81) to the mound. He is coming off a solid May when he had a 1.37 ERA in four starts. He has six career appearances and a 5.40 ERA against the Dodgers, but just one prior start.

"I just have so much fun playing baseball, and that's what it's about for me, just going out and competing for the team," said Gant, who has held his opponents to one earned run or less in five of his last six starts.

"(I'm) just trying to do everything I can to give us a chance to win the game," he said.

Said Cardinals manager Mike Shildt, on Gant's knack of wriggling out of trouble: "He's the pitching equivalent of (the video game) Frogger. He plays in a lot of traffic, but he's really good at it."