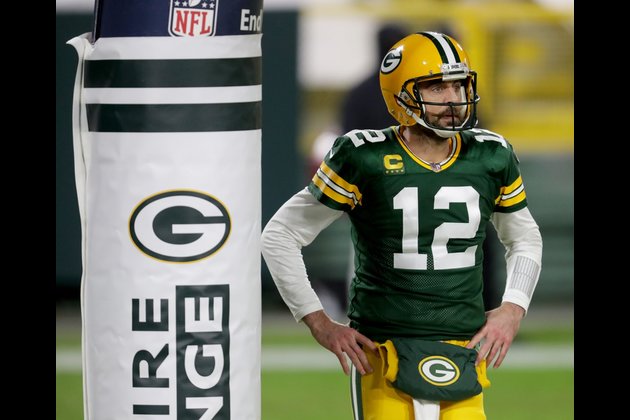 "The situation we face with Aaron Rodgers has divided our fan base," Murphy wrote in his monthly column posted Saturday on the team website. "The emails and letters that I've received reflect this fact."

Rodgers' beef with the franchise has made offseason news, and Packers coach Matt LaFleur said recently he doesn't know if the MVP-winning quarterback will show up when mandatory minicamp begins Tuesday.

Rodgers has skipped voluntary workouts with the Packers -- atypical from his usual behavior -- after the world became aware of his desire to leave Green Bay on Draft Day.

The Packers have continued to insist they have no plans to cut or trade Rodgers, and Rodgers risks fines of $93,000 if he bails on mandatory workouts.

Late last month, Rodgers told ESPN's "SportsCenter" that his issue with the organization is more about philosophy and less about the team drafting his presumed replacement, Jordan Love, a year ago.

In his column, Murphy reiterated Green Bay's desire to bring back Rodgers.

"We remain committed to resolving things with Aaron and want him to be our quarterback in 2021 and beyond," he wrote. "We are working to resolve the situation and realize that the less both sides say publicly, the better."

But Murphy did have something to say about the progress of Love, the 22-year-old who didn't see any action in his rookie season.

"It was a shame for Jordan that the pandemic impacted so much of his rookie year. Although it wasn't a completely wasted year, he had no in-person practices in the offseason program and no preseason game experience," Murphy said. "Although it is hard to tell a lot in the offseason practices, both Matt LaFleur and offensive coordinator Nathaniel Hackett have said they like what they've seen from Jordan this offseason.

"Hackett said that the biggest difference this year is his confidence in the system, and that his decision-making, timing and accuracy have all improved. It's obviously helped him to get reps with the first-team offense this offseason. The preseason games this year will be crucial in his development."

Last year Rodgers, 37, threw for 4,299 yards and a career-best 48 touchdowns with just five interceptions in leading the Packers to the best record in the NFC (13-3) and an NFC Championship Game appearance.

Last year Rodgers, 37, threw for 4,299 yards and a career-best 48 touchdowns with just five interceptions in leading the Packers to the best record in the NFC (13-3) and an NFC Championship Game appearance.

Murphy essentially confirmed Schefter's report that he, general manager Brian Gutekunst and coach Matt LaFleur all made separate trips to meet with Rodgers throughout the offseason and that the team was "very much aware of Aaron's concerns." Murphy proclaimed at that time that the team remains "committed to Aaron in 2021 and beyond."

The most recent development in the story came last week, when Rodgers was a guest on Kenny Mayne's final SportsCenter show. Rodgers suggested his issue with the Packers was about an organizational philosophy that he believes has gone awry. And while the drafting of quarterback Jordan Love last year changed things for him, his beef was not with Love but rather with the way it went down.

"I love Jordan; he's a great kid [and we've had] a lot of fun to work together," Rodgers said last week. "Love the coaching staff, love my teammates, love the fan base in Green Bay. An incredible 16 years. It's just kind of about a philosophy and maybe forgetting that it is about the people that make the thing go. It's about character, it's about culture, it's about doing things the right way."

Rodgers has skipped the Packers' offseason program, forfeiting a $500,000 workout bonus. If he skips next week's mandatory minicamp, which begins Tuesday, he would be subject to a fine of $93,085.

Rodgers became the Packers' starting quarterback 13 years ago amid a divided fan base: those who wanted the Packers to take back Brett Favre after he unretired and those who were ready to move on. The pro-Favre crowd was more vocal in that scenario and Favre became a sympathetic figure before he was traded to the New York Jets. The anti-Favre sentiment, however, heightened when he came out of retirement again a year later to play for the rival Minnesota Vikings.

At this point, it has been a mixed reaction in the NFL's smallest city: those who want Rodgers back at any cost and those who are upset with a player who no longer wants to be part of their team.

"As I wrote here last month, we remain committed to resolving things with Aaron and want him to be our quarterback in 2021 and beyond," Murphy wrote in Saturday's column. "We are working to resolve the situation and realize that the less both sides say publicly, the better."