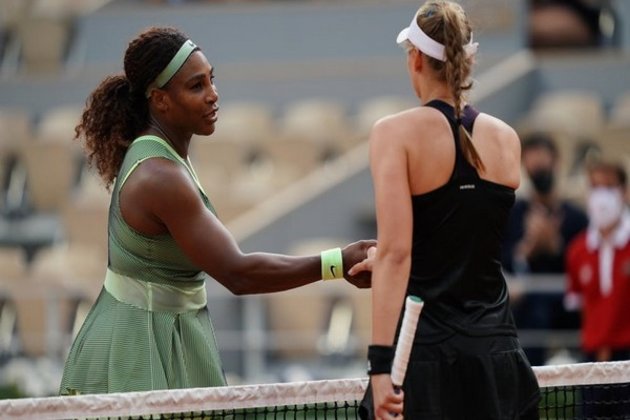 Paris [France], June 7 (ANI): Kazakhstan tennis player, Elena Rybakina was all praise for Serena Williams after she defeated the 23-time Grand Slam champion 6-3, 7-5 in the fourth round of the French Open on Sunday.

The 21-year-old grew up watching Serena on TV and had always hoped to meet the legendary American in competition.

"I'm so happy with the match today. It's difficult to expect anything, because you watch on TV and that's completely different when you come on court and you feel the power and everything. I knew that the serve was going to be difficult for me to return," reflected Rybakina, who blocked out the aura of facing Serena that so many succumb to.

"She's powerful, but I was ready. Then after few points I felt it comfortable, so nothing."Moments after the match, Serena hinted her Roland-Garros days are not over.

"Yeah, I'm definitely not thinking about it at all," said Serena with a grin when asked if this may have been her last match on Parisian clay. "I'm definitely thinking just about other things but not about that.""It was definitely close. I'm so close. There is literally a point here, a point there, that could change the whole course of the match. I'm not winning those points."The chase for that elusive record-equalling 24th Grand Slam now moves to Wimbledon for Serena.

"I'm kind of excited to switch surfaces, but historically I have done pretty well on grass. I have done pretty well on clay too," continued the seven-time Wimbledon winner. "Just not this particular season. I don't know. I don't think I'm going to play a warm-up."The world No.22, Elena Rybakina will now battle out with No.31 seed Anastasia Pavlyuchenkova in the last eight. (ANI)