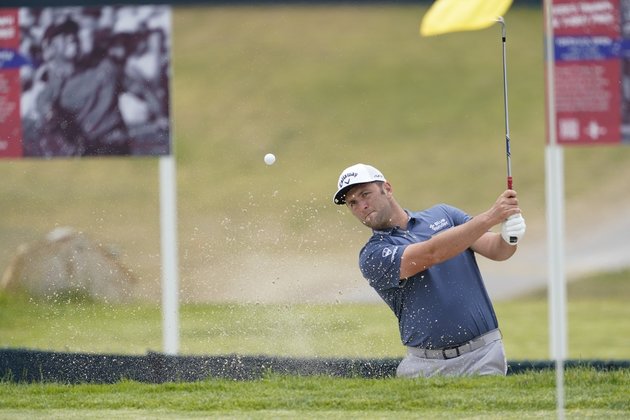 Ahead of this week's U.S. Open, Spanish star Jon Rahm said he is confident he'll regain his form in short order after having to withdraw from the Memorial Tournament two weeks ago due to a positive test for COVID-19.

Rahm led the Memorial by six strokes after the third round when he was handed the bad news on June 5.

"When you don't hit a golf shot for just over a week or just about a week, it's tough leading into a major, especially a U.S. Open," Rahm said. "I'm confident I can get in form quick enough. I still have two more days.

"Yeah, I still have the memory of all those great golf shots I played, right?" he continued. "I'm going to choose to remember that. I've been playing really good golf all year. Two weeks ago, it's finally clicking all together like I was waiting for it to happen. Finally everything was firing on all cylinders. Not that I'm expecting to play that perfect again, but I know that I can play at a really high level."

The No. 3 player in the world hasn't played since withdrawing from the Memorial, and he has yet to capture his first major title. But that hasn't stopped oddsmakers from installing him as the betting favorite this week at Torrey Pines in San Diego: Rahm is 900 to win at BetMGM, 1000 at PointsBet and 1050 at DraftKings.

Rahm, 26, had received the COVID-19 vaccine before playing in the Memorial, but was still within the 14-day grace period before being considered technically inoculated.

Rahm said he braced for the worst once he was informed of his positive test.

"Well, priority No. 1 amongst all that happened was, obviously, letting the people I had been in contact with the two previous weeks, letting them know, making sure they were all OK, and then trying to get out of there and go home and at least be in a familiar place," Rahm said.

He said he watched some of the Memorial's final-round action as Patrick Cantlay outlasted Collin Morikawa to win in a playoff.

"Then after that, just isolated," Rahm said. "I was a little bit scared because, even though I was feeling fine, I didn't want to give the virus to anybody in my house. I didn't want to possibly give it to our young son. Yeah, I think the hardest part out of all this was for just over 10 days not being able to even spend any time with my little one."

Rahm revealed his parents went through with a previously planned flight from Spain to the U.S. to meet Rahm's son for the first time.

"Whatever happens on the golf course was absolutely secondary in my mind," he added. "For anybody wondering what was going through my mind, all that was going on because my parents landed Monday, Tuesday they met my son, and I wasn't there. That was truly, truly a hard thing."

Rahm lost out on what seemed like a surefire victory at the Memorial that would have come with a $1,674,000 prize. But he said people should not criticize the PGA Tour for having him withdraw.

"We are in a pandemic, and even though this virus has very different forms of attacking people, you never know what reaction you're going to get," Rahm said. "So PGA Tour did what they had to do. The CDC (has) rules for a reason.

"Unfortunately, I had a really good showing, and I was pulled out of the tournament right before the final round, but, again, the PGA Tour did what they had to do. I've heard a lot of different theories: I should have played alone; I shouldn't have -- that's nonsense. The rules are there, and it's clear."

Rahm did mention that he wished the tour had handled informing him differently. The moment when a PGA Tour official broke the news to Rahm was seen live on national television.

"I put arguably the best performance of my life, and I get told again on live TV, 'Hey, you're not playing tomorrow,'" he said. "So it could have been handled a little bit better, yeah, but it still doesn't change the fact of what really happened."