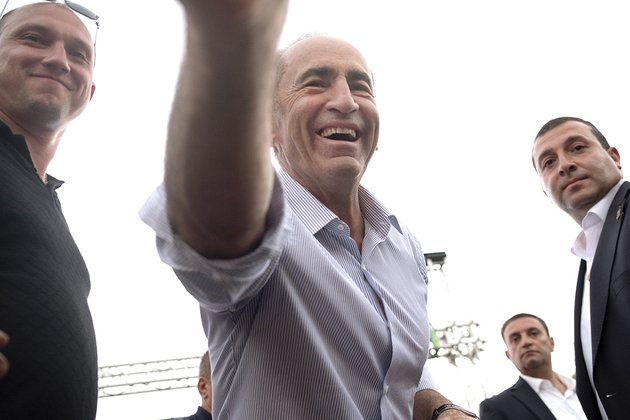 As the most sharply contested elections in Armenian history near, a surprise figure has emerged as the top opposition contender: former president Robert Kocharyan.

By all accounts Kocharyan and his "Armenia" alliance have broken away from the rest of the many contenders seeking to oust incumbent prime minister Nikol Pashinyan and his Civil Contract party. Kocharyan's record as a successful commander during the first war with Azerbaijan in the 1990s and perceptions he is a decisive manager have attracted the support of the many Armenians for whom national security is the major issue following the defeat in last year's war and ongoing tension with Azerbaijan.

"When Pashinyan came to power three years ago the issues were equality, wealth distribution and concentration of power in the elite," said Hrant Mikaelian, a Yerevan-based political analyst. "Now people are demanding security, so Kocharyan is on the rise," he told Eurasianet.

One recent widely cited opinion poll, from MPG/Gallup, even showed Kocharyan with a slight lead over Pashinyan ahead of the June 20 election. Mikaelian and other analysts have cast doubt on the poll's reliability, but the former president's rise is unmistakable.

Rafael Oganesyan, a political scientist who is conducting his own academic surveys of the electorate, said that support for Kocharyan has risen as tension has spiked along the border with Azerbaijan, where Azerbaijani troops have made advances and on occasion captured Armenian soldiers.

"We noticed an increase in support for Kocharyan (and a decline for the job approval rating for Pashinyan) following the border incursions and kidnapping of Armenian soldiers by Azeri troops," Oganesyan told Eurasianet in an email. "Thus, the spike in Kocharyan's support may be due to the (relative) increased salience of national security." Still, he said, his numbers show a significant lead, 28-13, for Pashinyan over Kocharyan.

He added that he did not have data after Azerbaijan's June 12 release of 15 Armenian prisoners of war and whether that might further boost Pashinyan.

Other polling data suggest a ceiling for Kocharyan's support. The International Republican Institute in a May poll found that 45 percent of Armenians viewed Pashinyan favorably, while 33 percent saw him unfavorably. Kocharyan's numbers, meanwhile, were 20 and 58. And that latter figure "is probably an underestimate," said Richard Giragosian, the head of the Yerevan think tank Regional Studies Center.

Back from the wilderness

Kocharyan was president of Armenia from 1998 until 2008, and after stepping down he disappeared from public life. He left Armenia and since 2009 has served on the board of directors for Sistema PJSFC, one of Russia's largest investment companies. (Sistema's website lists him as a current board member.)

But he reemerged following Pashinyan's coming to power in 2018's "Velvet Revolution." One of Pashinyan's first acts as prime minister was to reinvestigate the events of March 2008, when protests broke out against the legitimacy of an election that gave the presidency to Kocharyan's ally and successor, Serzh Sargsyan. Government security forces violently broke up the protests and eight protesters and two police officers were killed. Pashinyan was one of the organizers of those protests and spent more than a year in prison as a result.

Kocharyan returned to Armenia in July 2018 to be questioned in the case and was himself arrested the next month, beginning a years-long legal saga that saw him leave and return to jail several times before finally being acquitted in April 2021.

Kocharyan's decision to return to Armenia to face justice contrasted with many other former regime figures who fled the country following Pashinyan's coming to power. In his court appearances he has been in noticeably good shape, and reports emerged of him maintaining an active business schedule in jail along with his workout routine. "He was never crying 'oh, they put me in jail,'" and that forbearance now makes him look strong among many voters, Mikaelian said.

As Pashinyan sought to reform Armenia's court system, it began to look more and more that the effort was revolving around the desire to keep Kocharyan in jail. And when current and former leaders of the de facto Nagorno-Karabakh government posted bail for Kocharyan in 2019, Pashinyan viciously criticized the figures, opening a rift between Yerevan and Stepanakert.

All of that kept Kocharyan in the public eye. For many Armenians the campaign against Kocharyan amounted to bringing justice to the unpunished alleged crimes of his rule, but others saw him as the victim of a political vendetta.

During his time in jail he finished a memoir, published in 2018, in which a major theme was that while he was himself disinterested in power, he was repeatedly cajoled by others into taking leadership roles, first as the leader of Nagorno-Karabakh in 1992 and then prime minister of Armenia in 1997 (he was elected president the following year). He has returned to that theme on the campaign trail.

"All my close friends ask me 'Why are you doing this [running for office]?'" he told a rally in the Tavush region on June 13. "And I always tell myself: 'If not me, then who?' I asked this question to myself in 1992, 1997 and I'm asking myself the same question now, today. It feels like it's my destiny to fix what others broke."

Polls show that Kocharyan's support is strongest in Armenia's cities, while Pashinyan enjoys an advantage in rural areas, where the current government has invested in infrastructure and development programs. Rural people "can see the change after the revolution, and they may take into account what is closer to them rather than the political issues of war and relations with neighboring countries," one Western diplomat in Yerevan, speaking on condition of anonymity, told Eurasianet.

Among the urban middle class, by contrast, Kocharyan's strength on issues of war and security resonates. He has formed a coalition with the nationalist Armenian Revolutionary Federation - Dashnaktsutyun and campaigned as the tough-on-Azerbaijan candidate.

Kocharyan has repeatedly promised that he would regain some of the territories that Armenia lost during the war, in particular the Karabakh cities of Hadrut and Shusha (which Armenians spell Shushi). Another former president who also is standing in these elections, Levon Ter-Petrossian, has criticized Kocharyan for unrealistic warmongering. "Azerbaijani troops are in Hadrut and Shushi, and we can only regain them through war. This means Robert Kocharyan is promising a new war and more victims," he said in a June 15 interview on public television.

Kocharyan's campaign also has proposed creating popular militias, in contrast to Pashinyan's promise to create a fully professional army. "It's not the gun that shoots, but the person," Kocharyan told the Tavush rally.

"Kocharyan's alliance is very nationalistic," the diplomat said. "It's this patriotic line that is now important for many Armenians."

Kocharyan's campaign has been active, running more ads than Pashinyan's team. "This is perhaps a first for Armenian elections," Oganesyan, the political scientist, said. "The presence of competition, combined with a large chunk of non-committed voters, is fueling the campaigns to increase engagement with voters via rallies, party material, and overall ads. This is a net positive for electoral politics." But, he added, "it remains to be seen whether their omnipresence can encourage people to the polls."

Polls show large numbers of undecided voters, making the results especially unpredictable. Most analysts expect Kocharyan ultimately to fall short. "I see no scenario where Kocharyan wins the majority or plurality of the votes," Oganesyan said. Analysts believe Pashinyan's voters are more likely to show up at the polls than are those for the opposition, and Kocharyan's checkered past and high unfavorability ratings may ultimately catch up with him.

"Kocharyan doesn't have skeletons in his closet," Oganesyan said. "He has a whole graveyard in there."