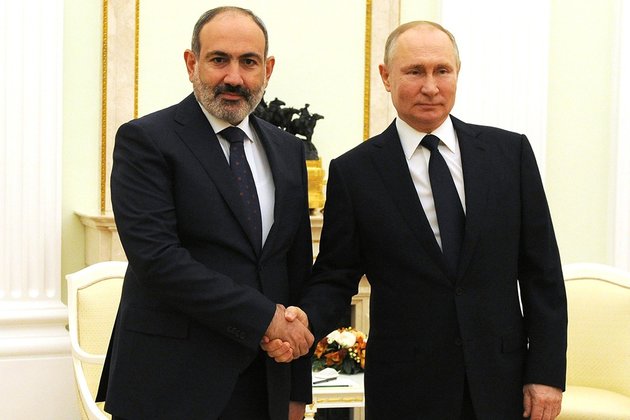 In Armenia's upcoming elections, Russia's choice would appear to be obvious. One of the two main contenders is a proudly pro-Russia friend of President Vladimir Putin. The other is a former journalist who came to power via street protests and then surrounded himself with figures from the liberal NGO world.

And yet, the Kremlin appears to be sitting this one out.

Prime Minister Nikol Pashinyan has, against long odds, managed to convince Moscow in his three-plus years in power that he is a reliable Russian ally. And Armenia's defeat in last year's war with Azerbaijan, which ended in a Russia-brokered ceasefire statement, has only deepened the mutual dependence between Pashinyan and the Kremlin.

As a result, Russia has done apparently little to boost the man who should be the Kremlin favorite in the race, former president Robert Kocharyan. Kocharyan has made no secret of his desire to enlist Moscow's aid ahead of the June 20 election, giving regular interviews in the Russian press and frequently talking up his pro-Russia bona fides on the campaign trails.

But those "appeals for Russian backing and assistance" have been "rebuffed," said Richard Giragosian, the head of the Yerevan think tank Regional Studies Center. "I still see the Russian government preferring to see a Pashinyan government in power. In many ways Pashinyan has become a trophy for Putin: a legitimate, democratically elected leader well under Russian subordination and control. The opposite of [Belarusian President Aleskandr] Lukashenko."

When Pashinyan led street protests in 2018 that he called the "Velvet Revolution," it drew inevitable comparisons to the pro-Western "color revolutions" around the former Soviet space, notably in Georgia and Ukraine, that Russia strongly opposes. But unlike counterparts in Tbilisi and Kyiv, Pashinyan and his allies studiously avoided geopoliticizing the revolution, keeping the focus strictly on Armenia's corrupt, authoritarian domestic politics and not questioning its pro-Russia foreign policy orientation.

On coming to power Pashinyan maintained that focus, even as he appointed several "Sorosokans" - liberal NGO activists funded by Western governments and foundations - as senior officials and advisers. He faced aggressive scrutiny and frequent criticism from hawkish Russian analysts and press, and the Kremlin was clearly unhappy with the new authorities' efforts to prosecute Kocharyan and other close-to-Russia members of the former regime for alleged crimes committed while they were in power. Putin raised eyebrows in August 2018 when he publicly wished happy birthday to Kocharyan after having ignored Pashinyan's own birthday in June.

But Pashinyan never wavered in his foreign policy, even going so far as to send a small Armenian contingent to Russia's military mission in Syria, earning a rebuke from Washington in the process. "After coming to power he hasn't done anything to damage or alter Armenia's traditional foreign policy," wrote Sergey Markedonov, a senior analyst at the Center for Euro-Atlantic Security at the Moscow State Institute of International Relations. In 2019 and 2020 Putin wished Pashinyan a happy birthday.

Last year's war furthered Armenia's dependence on Russia, which has guaranteed the ceasefire and now deploys a 2,000-strong peacekeeping mission to the Armenian-controlled part of Nagorno-Karabakh. Russia is committed to the success of the ceasefire document, which has Pashinyan's signature on it.

Kocharyan, meanwhile, has been hinting that he would be able to alter the agreement in Armenia's favor due to his good relations with Russia. While Moscow might be flattered by the sentiment, it is more likely to not want anything to disrupt the fragile calm between Armenians and Azerbaijanis.

"In this context Pashinyan, however problematic a partner [for Russia] that he may have been, is a guarantee that the post-war order will not be damaged for the sake of short-term PR or an election victory," Markedonov wrote.

In the campaign itself, all major candidates have been trying to outdo one another in their demonstrations of fealty to Moscow. Kocharyan has been calling for an expanded Russian military presence in Armenia and accusing the current authorities of spoiling relations with Russia.

Pashinyan - when the United States, Georgia, and European Union brokered an agreement to return several Armenian soldiers from Azerbaijani detention - went out of his way to thank Putin and other Russian officials, despite them having nothing to do with the deal. "We will continue developing and strengthening strategic partnership with Russia, which is our number one partner in the security sphere," he said on another occasion.

And when another candidate, Pashinyan-ally-turned-critic Artur Vanetsyan was interviewed by prominent Russian journalist Vladimir Solovyev, he parroted the Russian patriotic slogan "Crimea is ours!" But then, BBC Russian reported, he immediately corrected himself: "I mean, yours."

Opinions in Moscow remain ambivalent. BBC Russian said it surveyed sources "close to various circles of the Russian authorities" and found varying takes: "Some insist on the unacceptability of Pashinyan's 'Sorosites,' while others claim that he long ago became an understandable and comfortable partner for Russia, despite the incompatibility of their styles."

What is clear is that the Russian government sees more risk in trying to topple Pashinyan than benefit in an even more pro-Russia replacement. "This apparent even-handedness in the Kremlin's approach to the candidates gives lie to the popular opinion that Moscow is tired of the 'too pro-Western' Pashinyan and is waiting for the chance to restore the tried and tested Kocharyan," wrote Russian journalist Kirill Krivosheev. "Russia clearly doesn't want to ruin its reputation in Armenian society without good reason by appearing to impose its favored candidate like a colonial master."

Added Markedonov: "Moscow has unfortunate experience under its belt, when open support for 'its' candidates (in Ukraine, for example), did not result in the expected results, but instead provoked problems and crises."