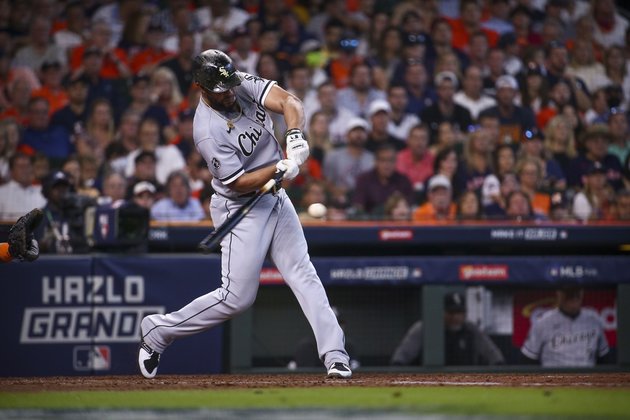 Our MLB betting expert offers Astros vs White Sox predictions and picks ahead of Sunday's Game 3 of the American League Division Series slated to start at 8:07 p.m. ET on FS1.

The Astros are one win away from the reaching the American League Championship Series for the fifth straight season. Houston won each of the first two games of this series by five runs and its pitchers didn't allow a single extra-base hit.

The White Sox are well aware that 10 teams have overcome an 0-2 deficit to win a postseason series. Chicago went just 2-5 against the Astros in the regular season and the issues are continuing in the postseason.

White Sox shortstop Tim Anderson is doing all he can to keep his team alive.

Anderson had three hits in Game 2 while setting a record for most postseason hits (13) through a player's first five playoff games.

Anderson isn't expecting his club to get swept but also knows being outscored 15-5 over the first two games isn't a good omen. An immediate turnaround is needed.

"Our backs are against the wall right now," Anderson said after Game 2. "We know what we've got to do, and we've got to take care of business. We have to keep fighting and keep pushing. And we competed. We competed at a high level. We know things will get better."

Anderson (4-for-9) is one of three Chicago players who are performing well. Luis Robert is 5-for-7 and Jose Abreu is 4-for-8,

But the bad thing is that all 18 White Sox hits are singles. That must change if Chicago is to come back and win the series.

Houston has homers from Yordan Alvarez and Kyle Tucker among its six extra-base hits. But the Astros aren't expecting an easy time on the South Side of Chicago.

"That's a great team we're playing on the other side," Houston shortstop Carlos Correa said. "They can get the job done any time. It doesn't matter if they're down two games. They will fight back. We've got to stay focused and try to get one more win."

Houston players regularly get reminded of the sign-stealing scandal that tarnished their 2017 World Series crown when they are on the road.

But here they are arriving in Chicago needing just one win to advance -- and apparently not cutting corners or, well, cheating.

Simply put, the Astros have outplayed the White Sox in the series. But Houston manager Dusty Baker has the experience to know that can quickly change.

"We have to act like we're going in there 0-0, because we're going into very hostile territory," Baker said after Game 2. "They beat us in Chicago two out of three (in July). So we've got work to do. These guys aren't going to rest on their laurels, because we haven't accomplished anything yet."

Garcia received a no-decision against the White Sox on June 18 when he gave up one run over seven innings. He struck out eight and walked none.

Brantley is certainly a guy to watch on Sunday -- not just because of his track record against Cease but because he has a 13-game postseason hitting streak.

Altuve has an 11-game postseason hitting streak and has hit five homers during the stretch. He is clearly a guy that could be clearing the fence.

Of course, the powerful Alvarez looks like he can hit a homer every time he steps up to the plate for the Astros.

While Anderson is hot, he typically isn't a guy you anticipate hitting one over the wall.

Eloy Jimenez and Yasmani Grandal are threats and Luis Robert has decent pop.

But our guy in Game 3 is Abreu, who hit 30 homers in the regular season, his fifth campaign of 30 or more. Abreu has one homer in five career postseason games.

The White Sox badly need some pop and the 2020 AL MVP is the best bet to provide some.