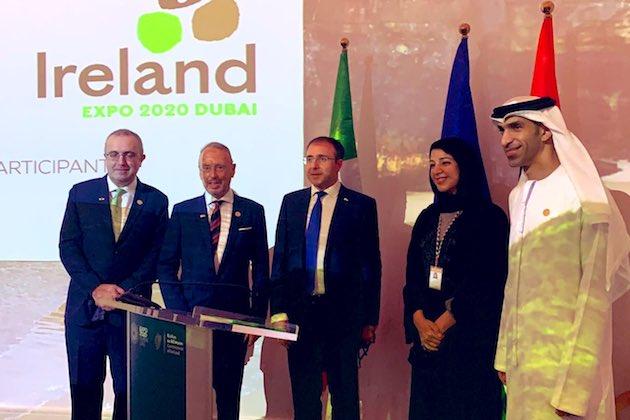 ABU DHABI, UAE - Exports from Ireland to the UAE grew 12 percent in 2020, a figure the country's minister for trade promotion says will grow further thanks to Expo.

Companies backed by Enterprise Ireland the Irish Government's trade and innovation agency recorded €152 million (Dh646m) in exports to the UAE in 2020.

Despite having one of the most stringent lockdowns in the EU, Ireland's economy was the only country in the bloc to grow in 2020. This was mainly driven by record exports, which were up 6.25 percent.

Explaining the double-digit rise, Robert Troy, Minister for Trade Promotion, Digital and Company Regulation, said Ireland had recorded a "significant increase" in the exports of food, drink and pharmaceuticals, as companies innovated and adapted to ensure they could continue trading and, in some cases, increase or win new business.

"We have seen that over the last 12 months in particular, from an Irish perspective, that pharmaceutical products has increased substantially because of Covid-19," Mr Troy told the UAE-based The National.

"That's partly the reason why we've seen that increase, but there's also been a renewed emphasis and focus on this region by state agencies like Enterprise Ireland."

Mr Troy was in the UAE on a trade mission visit to the region that also included a trip to Qatar.

During the next six month, several Irish ministers are expected to travel to Dubai for Expo as the country looks to grow business opportunities for Irish companies.

"It's no coincidence or accident that we have prioritised this destination as a base for a trade mission," Mr Troy said.

"It's because we see that this has huge opportunities in terms of potential growth for Irish businesses."

Across the IMEA region (India, Middle East, and Africa), trade is valued at €1.14 billion (Dh4.89bn). Based on current trends, Ireland predicts to more than double that figure to €2.31 billion (Dh10.4bn).

Several Irish companies announced new agreements during the event, including sustainable energy solutions provider NuLumenTek, which has been awarded a contract to supply the architectural lighting for the refurbished external public areas of Dubai Metro stations.

Irish retailer Supervalu also signed a new agreement with Middle East online grocery marketplace Noon to double its product range on the platform to 250 in total, which includes a fresh foods range.

Mr Troy also attended the official launch of the Ireland pavilion at Expo, which he said will be used to build and grow relationships that he believes will lead to further business growth for Irish companies.

The pavilion will also help revive the country's tourism and hospitality industry, which has been devastated by the closure of its international border.

The Irish Tourism Industry Confederation said last month that the pandemic had cost the industry more than €13 billion and caused the loss of 100,000 jobs.

Tourism Ireland, an all-island agency, recently launched a marketing campaign called Green Button that encourages visitors to switch from dreaming about holidays in Ireland to actively booking them.

The campaign will include flight deals and accommodation offers.

"The Green Button campaign gives a great opportunity for people who are going to visit here to get an opportunity to look, from an interactive perspective, at the tourism product that we have to offer.

"I have no doubt that that's going to play a significant contribution in helping to increase the number of visitors coming to Ireland and that's particularly important on the back of a severe reduction in visitors over the last 18 months."

Reem Al Hashimy, Minister of State for International Co-operation and director general of Expo 2020 Dubai, and Dr Thani Al Zeyoudi, Minister of State for Foreign Trade and Minister in charge of Talent Attraction and Retention, also attended the launch of the Ireland pavilion and its programme, which includes a Middle East-inspired version of Riverdance.

Ireland pavilion at Expo 2020 - in pictures

The Irish pavilion is in the Mobility District, near Jubilee Park. Photo: Embassy of Ireland