Seoul Turns to Vatican to Salvage Diplomacy with Pyongyang 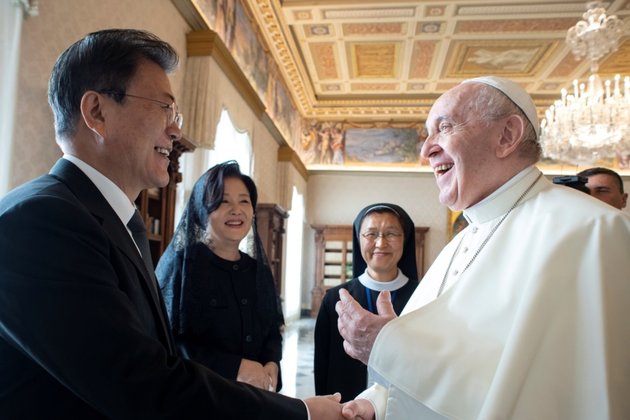 WASHINGTON - South Korean President Moon Jae-in is again attempting to arrange for Pope Francis to visit North Korea in what appears to be another push by the South Korean leader to resume diplomacy with Pyongyang.

Moon asked the pope to visit North Korea when the two met at the Vatican on Friday, telling him such a visit would create "momentum for peace on the Korean Peninsula," according to presidential spokesperson Park Kyung-mee.Moon was in Rome to attend the Group of 20 Leaders Summit over the weekend.

The pope said he is willing to visit "for peace and help all of you" if North Korea invites him, Park said.

South Korea's President Moon Jae-in, center, is greeted by Head of the Papal Household, Mons. Leonardo Sapienza, right, as he arrives for a meeting with Pope Francis at the Vatican, Oct. 29, 2021.

The Holy See Press Office told VOA's Korean Service on Friday that Moon and the pope discussed "the promotion of dialogue and reconciliation between Koreans" during their meeting.

"In this regard, hopes were shared that joint effort and good will may favor peace and development in the Korean Peninsula, supported by solidarity and by fraternity," said a Holy See spokesperson.

A U.S. State Department spokesperson said of Moon's approach to the pope, "We continue to consult closely with the Republic of Korea, Japan, and other allies and partners about how to best engage the DPRK." The spokesperson used the acronym for North Korea's official name, the Democratic People's Republic of Korea.

This is Moon's second attempt to arrange a visit by the pope to North Korea.In 2018, Moon made the request and the pope expressed his willingness to travel to Pyongyang. But North Korea leader Kim Jong Un never sent an official invitation.

Moon has been trying to resume diplomacy with North Korea before he leaves the Blue House in May. In meetings with the United States this month, his government promoted the idea of a declaration formally ending the Korean War as a vehicle for starting a dialogue with Pyongyang.

Jake Sullivan, the White House national security adviser, said this week Washington does not see eye to eye with Seoul on ways to bring about an end-of-war declaration. Sullivan was in Seoul earlier in the month discussing how best to pursue the denuclearization of North Korea.

"We may have somewhat different perspectives on the precise sequence or timing or conditions for different steps," Sullivan said, when asked about the U.S. position on an end-of-war declaration.

The declaration would formally end the 1950-53 Korean War, which ended with a cease-fire not a formal peace treaty.

Some former U.S. officials and experts are doubtful that a papal visit would break the current stalemate on the peninsula, where inter-Korean diplomacy and talks between Washington and Pyongyang have been stalled since 2019.Pyongyang effectively sealed its borders in January 2020 to combat COVID-19, leaving the country more isolated than ever.

"It's hard for me to see, sadly, how the pope's visit to Pyongyang would do much to promote peace on the Korean Peninsula. I can't see how it would influence the North," said Kent Calder, director of the Reischauer Center for East Asian Studies at the Johns Hopkins School of Advanced International Studies.

"It would be unrealistic to expect the pope to be able to broker any agreements that currently divide North and South," agreed Mitchell Reiss, director of the Office of Policy Planning at the State Department during the former George W. Bush administration.

"What a papal visit would do for Kim Jong Un would give him status, prestige and attention. And that would be something that he would be very happy to have," King said.

But other experts say a papal visit could create an opportunity for Kim to bring North Korea out of its self-imposed isolation and establish a route toward dialogue.

Harry Kazianis, senior director of Korean Studies at the Center for the National Interest, said there is "a strong chance" the pope will visit Pyongyang "in the near future" and it "could lay the foundation for a peace regime the Moon government hopes to create before it leaves the Blue House for good."

Kazianis continued, "The Kim regime needs to do whatever it can to change the media narrative away from being a closed society on the verge of starvation thanks to COVID-19 to something more positive."

Ken Gause, director of Adversary Analytics Program at CNA, a Washington-area think tank, said a visit by Pope Francis would give North Korea a chance "to engage with the outside world" and "cut through a lot of rhetoric on both sides - on the North Korean side as well as the U.S. side," to jump-start talks between the two.

Pope Francis brokered a diplomatic breakthrough between the U.S. and Cuba by sending letters to then-President Barack Obama and then-President Raul Castro and hosting a meeting at the Vatican for them in October 2014.

This led to normalized relations between the U.S. and the socialist country for the first time since the ties were severed in 1961. Washington's diplomatic and economic relations with Havana were limited under the Trump administration. Trump placed Cuba back on the list of countries sponsoring terrorism in his last week in January.