Can 1-6 Thunder repeat formula of only win vs. Lakers? 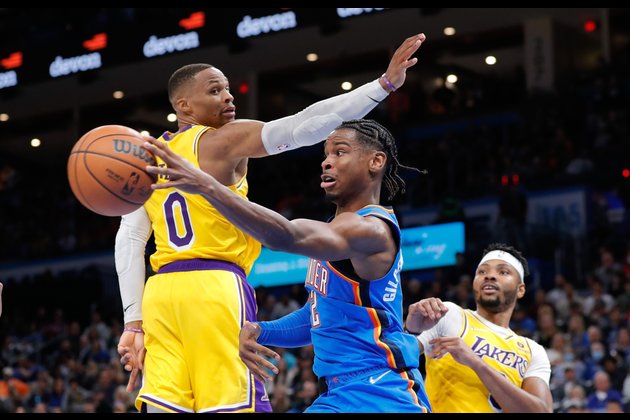 In a start to the season the rebuilding Oklahoma City Thunder would otherwise prefer to forget, there is one team they have gotten the best of during a 1-6 opening to the schedule.

The Thunder's only victory came last week when they upended the Los Angeles Lakers 123-115 at home. Now, they get another crack at one of the NBA's top teams when they meet at Los Angeles on Thursday.

The Thunder's victory over the Lakers was a showcase in resiliency. They rallied from a 26-point deficit behind 27 points from Shai Gilgeous-Alexander, while rookie Josh Giddey had 18 points and 10 assists, the only double-digit assist game of his short career so far.

Oklahoma City entered the game 0-4, and after defeating the Lakers, Gilgeous-Alexander declared that he "knew it would happen." But his sense of relief was more a suggestion than it was the breakthrough the team needed. Instead, the Thunder lost their next two games to open a three-game California swing.

"This is a good learning point for us," Giddey said. "Whether we win or lose, it's not the end of the world right now. (It's) making sure we learn from these lessons and not just seeing it as a loss but as a growth opportunity. ... We will review the film, then when we come back against the Lakers, it's back to 0-0. That's the mindset that we have moving forward."

While the inability to hold on to the late lead was a disappointment, the Thunder did end a streak of 43 consecutive games going back to last season where they gave up at least 100 points to their opponent.

The Lakers have kicked it into high gear since falling at Oklahoma City, winning all three of their games since, including consecutive victories at home over the Houston Rockets. They slipped by Houston 119-117 on Tuesday behind 30 points and 10 assists from LeBron James.

Anthony Davis and Russell Westbrook each had 27 points and nine rebounds in the victory as the Lakers' top three all scored at least 20 points for the first time.

"That's the beauty of our team, and to be able to have A.D. and Bron on the floor, you don't have to do everything," Westbrook said. "If those guys are going, then you're feeding whoever has it going, whoever has a better rhythm, we just kind of play off whoever that may be."

Carmelo Anthony had 15 points Tuesday, while going 3 of 5 from 3-point range. He is 14 of 21 from distance in three games since a 1 of 12 run that included a 1 of 8 effort last week at Oklahoma City.

The Lakers' Dwight Howard has missed the last two games with neck stiffness, while the Thunder's Lu Dort missed Monday's game with a shoulder injury.