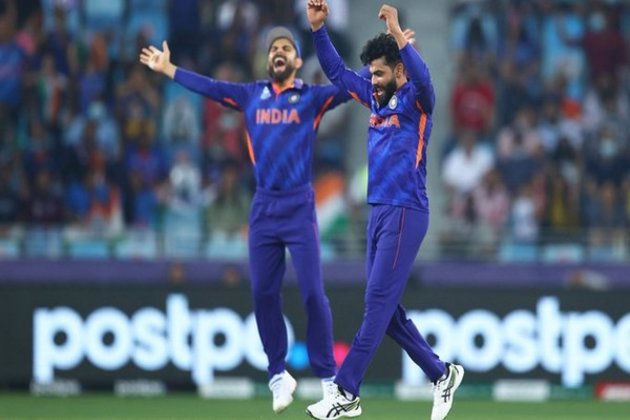 Dubai [UAE], November 6 (ANI): After a thumping eight-wicket over Scotland in the ongoing ICC Men's T20 World Cup, India all-rounder Ravindra Jadeja said that he enjoyed bowling against the opponent and also revealed that his side wanted to play a good brand of cricket.

India's attack combined brilliantly to restrict Scotland to 85 all out. Jadeja returned with three wickets, and the Scotland batters had no answers to what the spinner was throwing at them.

"I was enjoying bowling today. The old ball was turning and spinning so I enjoyed today very much. The first wicket was the special one. When you get the batter like that on a turning ball it is a special wicket," said Jadeja after the game.

"We looked to play a good brand of cricket. We knew we had to win with a big margin so we could improve our net run-rate so we gave 100 per cent and did what we had to. If we play like this no one can beat us. We have to play like this in the T20 format," he added.

Chasing 86, India got off to a firing start as the openers registered the fastest team fifty of the ongoing tournament.

India needed to chase 86 runs in 7.1 overs to better their net-run rate from Afghanistan but the Kohli-led side did the needful in 6.3 overs.

Having registered a thumping win, Kohli and boys will now be keeping an eye on New Zealand vs Afghanistan match on Sunday.

"A dominating performance, something that we were striving to do again. Now it will be interesting to see what happens on November 7. Don't want to say a lot about today's performance, we know what we can do," said Kohli.

"Also tells you how important the toss can be at this venue. We wanted to get them under 110-120 max, that was the mindset we went in with. The bowlers were excellent, and then KL and Rohit did really well," he added. (ANI)