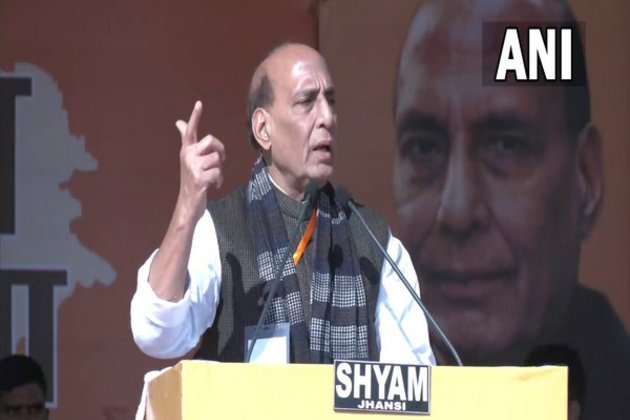 Jhansi (Uttar Pradesh) [India], December 19 (ANI): Ahead of Uttar Pradesh Assembly polls next year, Defence Minister Rajnath Singh on Sunday slammed the Opposition and said that the Bharatiya Janata Party (BJP) does not do politics by lying to the people.

Speaking at the Jan Vishwas Yatra here in Jhansi, Singh said, "We do not do politics by lying to the public. We do whatever we say. After Independence, many leaders made many promises to the public but did those leaders fulfill their promises? Perhaps India would have become the most powerful country in the world today."Singh added, "In the 75th year of independence, many politicians have made false promises. But, we have fulfilled all our promises especially the abrogation of Article 370."Bharatiya Janata Party (BJP) is set to take out 'Jan Vishwas Yatra' from six places in the state from Sunday.

The Yatras was inaugurated by the party's top leaders including Chief Minister Yogi Adityanath and other union ministers. Yatras were taken out from Bijnor, Mathura, Jhansi, Ghazipur, Ambedkar Nagar, and Ballia.

Uttar Pradesh is slated to go to Assembly polls early next year.

In the 2017 Assembly elections in Uttar Pradesh, the Bharatiya Janata Party bagged 312 seats out of the 403-seat Uttar Pradesh Assembly while Samajwadi Party (SP) bagged 47 seats, Bahujan Samaj Party (BSP) won 19 and Congress could manage to win only seven seats. The rest of the seats were bagged by other candidates. (ANI)