Manufacturing Brahmos missile not to attack any country but to maintain credible deterrence: Rajnath Singh 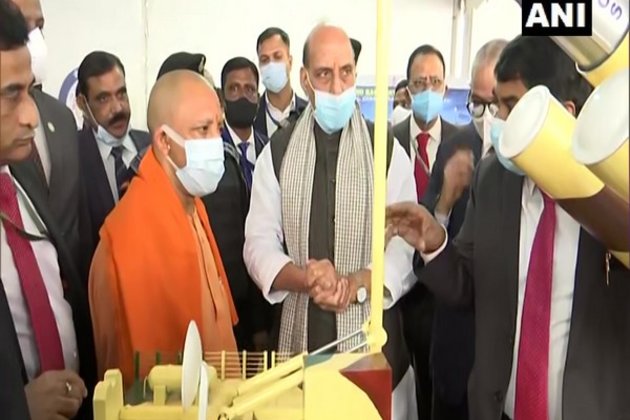 Lucknow (Uttar Pradesh) [India], December 26 (ANI): Defence Minister Rajnath Singh on Sunday said that India is manufacturing a Brahmos missile not to attack any country but to ensure that no other country dares to raise an eye towards India.

While laying the foundation stone of BrahMos Missiles production unit and Defence Research and Development Organisation (DRDO) lab at Uttar Pradesh's Lucknow, the Defence Minister said, "We are manufacturing missile not to attack any nation. In history, we have never encroached on any neighbouring country land or invaded any nation. We want to Manufacture Brahmos just to ensure that no nations with ill intentions dare to attack India and we proved our deterrence power in Uri and Pulwama."Attacking Pakistan, Singh said, "A neighbouring country that was recently separated from India always kept ill intentions regarding India. Pulwama was planned but under the leadership of PM Modi, India gave befitted reply and killed terrorists inside the territory of the country that planned the attack. We gave a clear message that India is powerful and can kill its enemy across the border."He stated that the Defence manufacturing units will add a new chapter to the economy of UP and create job opportunities in the state.

"Before 2017, businessmen from outside UP were scared to invest in UP but now UP has become one of the best states where businessmen want to come. In the shortest time, four Expressways were constructed and various other development projects were delivered in UP," he said.

"Investors are coming as UP CM has ended Mafia raj in the state and established rule of law," he said.

He congratulated and thanked Uttar Pradesh Chief Minister Yogi Adityanath for ensuring the acquisition of 200 acres of land in just 45 days for the Brahmos missile manufacturing Centre.

"In 1998 despite resistance from across the world, India conducted Pokhran nuclear test under the leadership of Atal. The foundation of new India was laid on the same day and the new India is moving ahead under the leadership of PM Narendra Modi. Many nations posed several kinds of restrictions on India after the Pokhran test but India kept strengthening its power," Singh said.

"Recently, I met Defence Minister of France and Russia. I requested them to come and manufacture in India. I pushed for Make in India, Make for India and Make for World," he said.