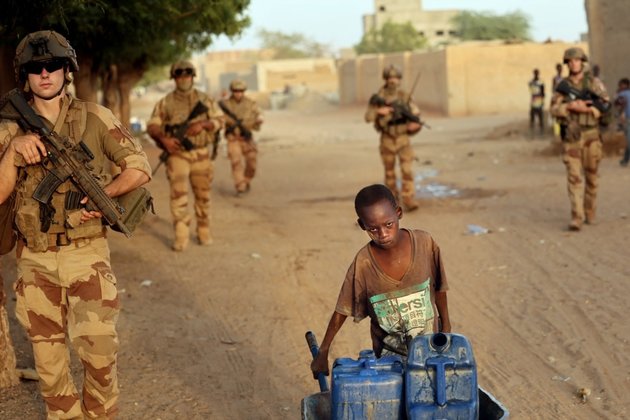 OUAGADOUGOU - Islamist militant attacks increased this past year in the Sahel region, leading to political instability that saw a coup in Mali, an attempted coup in Niger, and calls for Burkina Faso's president to resign. Burkina Faso experienced the deadliest terrorist attacks since the conflict began, but analysts say the worst could be yet to come.

2021 marks the ninth year of conflict in Africa's western Sahel, and in Mali, Burkina Faso and Niger, violence has only worsened.

A video recently posted online purports to show an attack on a military base in northern Burkina Faso that killed almost 50 military police in November. Terrorists said to be linked to al-Qaida can be seen firing heavy weapons from the backs of pickup trucks before burning and looting the base.

Across Burkina Faso, Mali and Niger, fatalities from clashes between state forces and armed groups linked to Islamic State, al-Qaida and criminal gangs are up 18% since last year, according to data from the Armed Conflict Location and Event Data Project.

The humanitarian impact has been huge, with close to 3.4 million now displaced as a result of the conflict, according to the United Nations refugee agency.

Amadou Agli, from Burkina Faso, fled the north of the country around three months ago after terrorists attacked nearby villages. He says he has a message for the world.

Agli says his community is living through very hard times and appeals to any people, NGOs and governments around the world who can help them. He says they are suffering a food crisis, a housing crisis and that the children are unable to attend school.

The year also saw a shift in the region's military structure, says Paul Melly, an analyst with London-based Chatham House, a research institution.

"The start of the process of moving towards a new pattern of French deployment where the Sahel armies in the G5 Sahel military structure are much more, the frontline face if you like, with the French in more of a backup and special forces role, air support, intelligence," Melly said.

Get Adobe Flash Player Embed share Sahel Conflict Set to Get Worse in 2022, Analysts Say Embed share The code has been copied to your clipboard. width px height px

The URL has been copied to your clipboard

Escalating insecurity has also plunged Sahel governments into political turmoil. Mali saw a coup by military leader Assimi Goïta in May after street protests against insecurity. The West African political bloc, ECOWAS, along with France, have put pressure on Goïta to hold democratic elections in 2022.

Protests against the government's handling of security in Burkina Faso in November forced the government to reshuffle military leadership and the Cabinet.

Andrew Lebovich is an analyst with the European Council on Foreign Relations.

"What people are concerned about is the ongoing insecurity and the state of security forces. So, if that doesn't improve, then no, the change in government certainly will not be enough to appease the opposition," Lebovich said.

Meanwhile in Niger, the emergence of civilian militia groups to fill the security gap could play a big role in 2022. In other Sahel countries they have been used to assist the military but have also been accused of human rights abuses, says Philippe M. Frowd, an associate professor at the University of Ottawa.

"We've seen this in southwestern Niger recently, kind of community violence spiraling and driven a lot by non-state armed groups. We see this in Burkina Faso as well where we have the state in fact relying on armed groups like this," Frowd said.

After a difficult 2021, the Sahel conflict looks set to worsen as the new year begins.