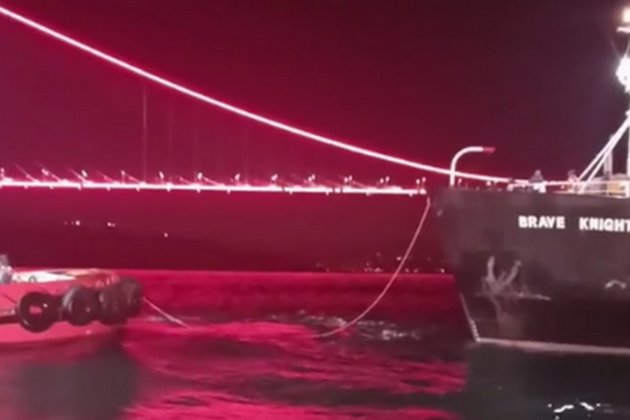 A 50-year-old bulk carrier brought maritime traffic in the Bosphorus Strait ? a major international waterway ? to a brief halt after it broke down near a bridge, making passage impossible.

The Lebanese-flagged cargo ship Brave Knight became stuck in the Bosphorus Strait in northwestern Turkey on Sunday, blocking the waterway in both directions for several hours after suffering machine failure near the Yavuz Sultan Selim Bridge, one of the world's tallest and widest suspension bridges.

The 101-meter-long and 16-meter-wide vessel was sailing to the Romanian port of Constanta when the incident happened, forcing the Turkish coastal safety authority to dispatch as many as 10 tugboats to move it away. Turkish media reported late Sunday that navigation was restored after the vessel was safely anchored.

The Brave Knight was built in 1972 and is owned by Alacia Maritime Ltd, a shipping company registered in Tripoli, according to MarineTraffic.

The Bosphorus Strait - also called the Strait of Istanbul - is just 700 meters (2,300 ft) wide at its narrowest point, and connects the Black Sea to the Sea of Marmara.