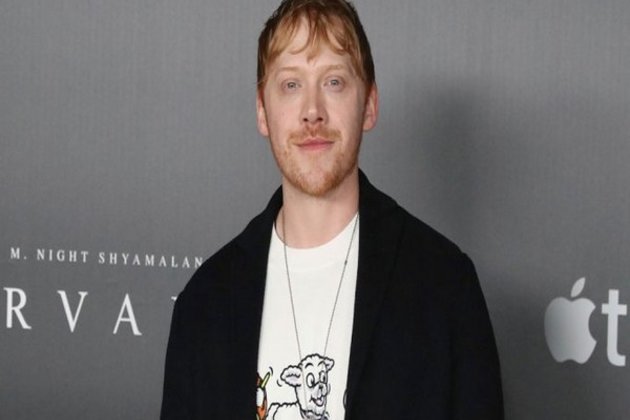 Washington [US], January 18 (ANI): 'Harry Potter' star Rupert Grint recently shared his thoughts on author J.K. Rowling's controversial transphobic comments and opened up about his "tricky" relationship with her.

Grint, who essayed the role of Ron Weasley in all eight of the 'Harry Potter' movies inspired by Rowling's hugely popular book series, has discussed the kind of relationship he shares with the author, reported People magazine.

The actor wrote a piece for 'What I've Learnt' series, revealing he likens Rowling "to an auntie.""I don't necessarily agree with everything my auntie says, but she's still my auntie. It's a tricky one," Grint wrote.

The actor, who stars in the Apple TV series 'The Servant', added, "I measure my life in Harry Potter movies.""They're so ingrained in me. I find it very hard to detach myself from being Ron - we merged into the same person," he continued.

"I can't believe it started 20 years ago. It definitely sculpted who I am. I mentally closed the door on it even though I'm constantly faced with it - there's the play, the theme park and it's always on TV," he added.

He further stated, "I don't see Dan [Radcliffe] and Emma [Watson] as much as you'd expect, so the reunion was very nostalgic."Grint recently took part in the HBO Max's 'Harry Potter 20th Anniversary: Return to Hogwarts' special where he reunited with his co-stars.

Rowling did not make an appearance in the special, although she was shown in archival footage throughout.

The 'Harry Potter' author came under fire in June 2020 when she appeared to support anti-transgender sentiments in a series of tweets. Though she denied that her views on feminism are transphobic, she doubled down on her controversial remarks in a lengthy essay shared on her website days later.

Radcliffe, Watson and Grint each spoke out against Rowling's much-criticised remarks regarding the transgender community. Radcliffe stated in an essay for The Trevor Project that "transgender women are women." "Any statement to the contrary erases the identity and dignity of transgender people and goes against all advice given by professional health care associations who have far more expertise on this subject matter than either Jo or I," Radcliffe wrote at the time.

Additionally, Grint said in a statement at the time, "I firmly stand with the trans community and echo the sentiments expressed by many of my peers. Trans women are women. Trans men are men. We should all be entitled to live with love and without judgment."Watson also expressed her support in a Twitter thread, writing, "Trans people are who they say they are and deserve to live their lives without being constantly questioned or told they aren't who they say they are. I want my trans followers to know that I and so many other people around the world see you, respect you and love you for who you are."However, actor Ralph Fiennes, who played Lord Voldemort in the Potter franchise, told a leading media publication back in March that he personally feels the "level of hatred" aimed at Rowling is uncalled for.

"I can't understand the vitriol directed at her. I can understand the heat of an argument, but I find this age of accusation and the need to condemn irrational," said Fiennes at the time.

"I find the level of hatred that people express about views that differ from theirs, and the violence of language towards others, disturbing," he added. (ANI)