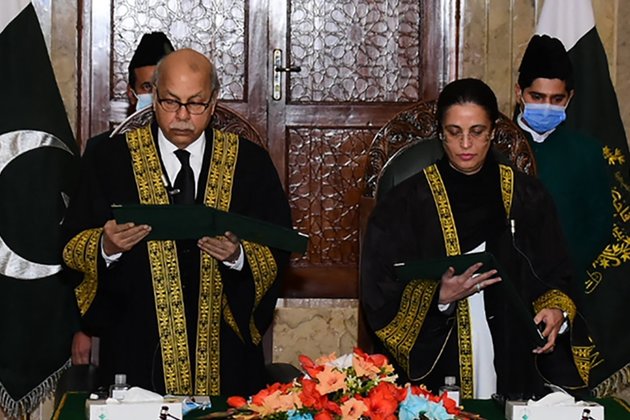 ISLAMABAD - Pakistan swore in its first woman Supreme Court judge Monday in what is being hailed as a landmark moment in the historically male-dominated judicial history of the Muslim-majority nation.

Ayesha Malik, 55, took the oath at a ceremony in the capital Islamabad that was televised live. She now joins the bench alongside 16 male judges at the top court.

"I want to congratulate Justice Ayesha Malik on becoming the first woman judge of the Supreme Court. I wish her all the best," Prime Minister Imran Khan tweeted.

The process to elevate Malik to the top court from the Punjab provincial high court, which she joined in 2012, had been unusually contentious.

Pakistan's nine-member judicial commission, which decides on the promotion of judges, had turned down Malik's elevation last year, before voting 5-4 to elect her this year.

Large sections of bar councils and lawyers' associations across Pakistan vehemently opposed her nomination, saying it was not in line with seniority lists as Malik was not among the top three most senior jurists of the provincial court.

Chief Justice Gulzar Ahmed, who administered the oath to her, told reporters after the ceremony that Malik was competent enough to be elevated to the Supreme Court.

"She deserved to become a judge of the Supreme Court [and] she became one. That's what it is," Ahmed said.

Christian Turner, the British high commissioner to Pakistan, said Malik's appointment as first woman Supreme Court judge "will inspire girls to believe that there are no barriers to their aspirations."

She declared the practice 'humiliating,' saying it 'had no forensic value' and 'offends the personal dignity of the female victim and therefore is against the right to life and right to dignity.'

Malik also directed the federal and provincial governments to take necessary steps to 'ensure that virginity tests are not carried out in medico-legal examination of the victims of rape and sexual abuse.'

The WHO has called the test "unscientific, harmful, and a violation of women's and girls' human rights."

"The biggest way I've had an impact is that I've become a voice. I'm there to call out the discrimination, call out stereotyping, and bring out the gender perspective," Malik said in a conversation with a United Nations media outlet when she was the provincial high court judge.

"I'm the voice that nudges, reminds, and suggests ways to improve ourselves and make our system more inclusive."