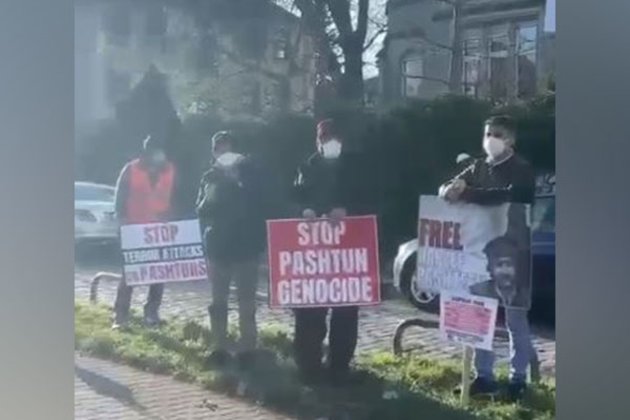 Frankfurt [Germany], February 12 (ANI): About 40 activists of the Pashtun Tahafuz Movement (PTM), a Pakistan based anti-Pakistan government movement, demonstrated in front of the Pakistani Consulate in Frankfurt on February 11 where they condemned Pakistan for its activities against Pashtuns.

The protest was carried out under the leadership of Aqeel Ahmad. Mohd Zareef and Sultani were other prominent leaders who were present in the demonstration and addressed the gathering.

The international wing of the PTM, a Pakistan based anti-Pakistan government movement will further demonstrate against Pakistan in different European cities on February 13.

The protests will be staged to condemn the assassination attempt on PTM leader Manzoor Ahmed Pashteen. Fazal ur Rehman, a member of the Pashtun Tahafuz Movement said, "PTM Europe has announced a series of protests all over Europe including France, Belgium, Germany, Italy, and Denmark to express anger and condemn the failed assassination attempt on PTM leader Manzoor Ahmad Pashteen.""And I think it's a redline crossed by Pakistan because Manzoor Ahmad Pashteen has already been put on exit control list by Pakistani authorities but even in Pakistan, there is a ban on his movement in different provinces. So, it's really a violation of international law United Nations universal declaration and the relevant UN conventions because Pakistan wants to stifle his freedom of movement and freedom of expression," Rehman added.

PTM accuses Islamabad of employing brute high handedness to stifle their voice for rights. They even accused authorities of arbitrarily arresting PTM activists and leaders.

They will hold separate protests to demand the release of those leaders. Rehman said, "PTM is organising a sit in front of the provincial assembly in Sindh for the release of PTM leader Ali Wazir, Hanif Pashteen and Owais Abdal because they have been arbitrarily arrested by the Pakistani authorities and even United Nations Human Rights Council under special procedures, seven rapporteurs have sent a letter to the government of Pakistan regarding Ali Wazir and even the inter-parliamentary union has also expressed its concern on the arrest of MNA Ali Wazir.""But Pakistani authorities are still applying the delaying tactics in the court to prolong the detention of these activists arbitrarily arrested by the Pakistani authorities. So, it's really a matter of concern. We will organise a protest all over the world to condemn these fascist acts of the state of Pakistan," added Rehman.

Pashtuns, an ethnic minority blames Pakistan for marginalising them for years. They say they have not been accorded their rights. And their demand for the same has been brutally suppressed. (ANI)