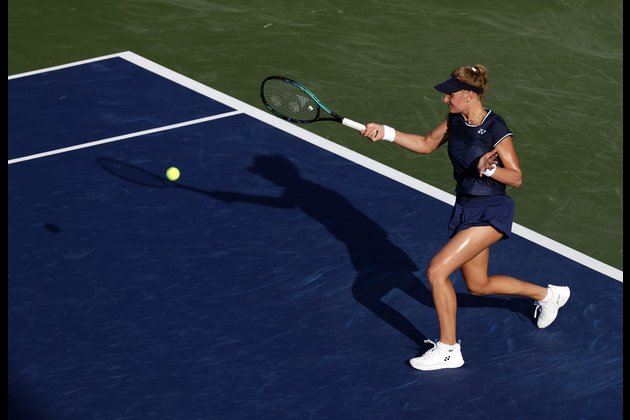 Dayana Yastremska is slated to play in the Lyon Open in France on Monday after successfully escaping Ukraine with her 15-year-old sister Ivanna.

Yastremska, 21, and her family were awoken by bombing in her hometown of Odessa on Thursday by Russian forces who have invaded Ukraine. Her family hid underground as repeated bombs went off in the area.

Her parents made the decision to help the two daughters flee the country. Yastremska's father drove the girls approximately 150 miles to the south on Friday morning to Izmail. The pair then took a boat to Romania and later flew to France.

"After spending two nights in the underground parking, my parents made a decision at any cost to send me and my little sister out of Ukraine!" Yastremska wrote on Instagram while posing a picture of herself and her sister. "Mom, Dad, we love you very much, take care of yourself!!! I love you my country! Ukrainians take care of your lives."

The Yastremskas were met in France by Lyon Open officials, safe from the fighting but scarred by events of recent days.

"I am scared for my parents, my friends, and everybody in my country," Dayana Yastremska told ESPN. "For you to understand what a missile strike is like, you need to feel it. But, I wish (nobody) has to ever feel this (pain)."

Elina Svitolina, ranked No. 15 in the world, is also from Odessa though she now lives in London. She was equally distraught over the Russian assault on her homeland.

"I'm shocked still in this terrible nightmare of what's happening in Ukraine," Svitolina told Sky Sports. "I'm really praying every single minute for my family for my friends for all people in Ukraine and around the world for safety, for peace."

Svitolina, 27, said she has numerous family members and friends in Ukraine.

"It's really stressful for me because I cannot do anything," Svitolina said. "I cannot go and help them. I wish I could help him. I can't even imagine what they are going through."

As for Yastremska, she will face Ana Bogdan of Romania in the first round in Lyon. She said she will represent her country to the highest level.

If she wins, there will be another tennis match. But if she loses?

"I have no idea," Yastremska told ESPN. "Let's see what happens to Ukraine, (and) to my city.

"I have my sister to think about, her safety."