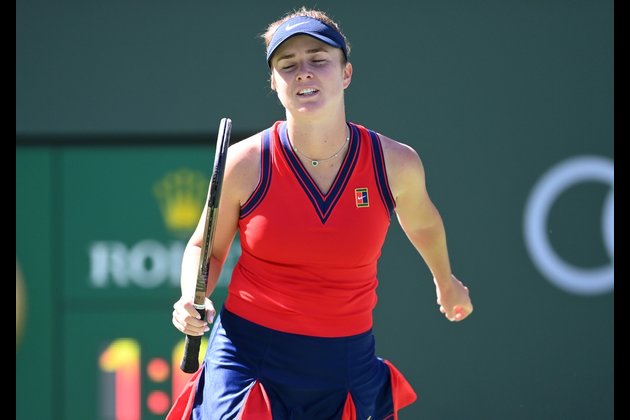 Ukrainian tennis star Elina Svitolina called on the WTA and other tennis organizations Monday to recognize players from the nations of Russia and Belarus only as "neutral athletes" and said she might withdraw in protest from this week's tournament at Monterrey, Mexico.

Svitolina is the top seed in the Monterrey Open draw and is supposed to face Russia's Anastasia Potapova in the first round.

"I believe the current situation requires a clear position from our organizations: ATP, WTA and ITF," Svitolina wrote in a statement on social media. "As such, we -- Ukrainian players -- requested to ATP, WTA and ITF to follow the recommendations of the IOC to accept Russian or Belarussian nationals only as neutral athletes, without displaying any national symbols, colours, flags or anthems.

"Accordingly, I want to announce that I will not play tomorrow in Monterrey, nor any other match against Russian or Belarussian tennis players until our organizations take this necessary decision."

Svitolina, 27, added that she does not place any blame on the Russian athletes themselves.

"They are not responsible for the invasion of our motherland," she said.

The 15th-ranked player in the world recently said she will donate her prize money from upcoming tournaments to Ukraine's relief and military efforts. Svitolina has been ranked as high as No. 3 in the world and has advanced to the semifinals of two grand slam events, both in 2019.

Other international sport governing bodies took steps to sanction Russia and Belarus on Monday. The International Olympic Committee called for a worldwide ban on the two nations competing, and FIFA banned Russia from the 2022 World Cup.