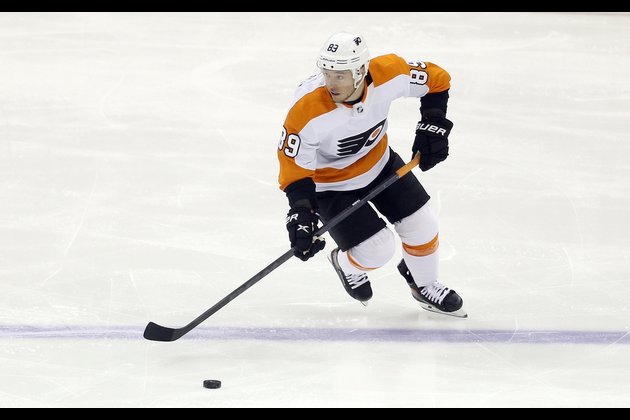 Following a frustrating 5-4 loss to the Minnesota Wild on Thursday, Philadelphia Flyers interim head coach Mike Yeo blasted his team for playing with a lack of urgency.

The Flyers bounced back with a 4-3 victory over the Chicago Blackhawks on Saturday and will look to maintain their positive momentum Tuesday when they complete a season-long eight-game homestand against the Vegas Golden Knights.

"We were all embarrassed by the last game, myself included," said the Flyers' Cam Atkinson, who had two goals and one assist against the Blackhawks. "To do that in front of our fans, that shouldn't have happened. We wanted to come out strong (Saturday) and play for each other and the logo on the front."

Oskar Lindblom scored the opening goal against the Blackhawks with a nifty redirection in front of the net. That early goal sparked the Flyers, who appeared to play with more passion than they had in a string of recent games.

"It was good to talk," said Lindblom, who has three of his nine goals in the last six games. "Everyone had something to say, and we came out pretty good (Saturday)."

The Flyers received a boost with the return of Kevin Hayes, who registered an assist after missing the previous 16 games with a groin injury.

"One thing about Haysie, he has great instincts, and he was clearly moving better than he was earlier in the season," Yeo said. "Hopefully, he can maintain it."

The Golden Knights will be searching for their third consecutive victory when they visit Philadelphia.

On Sunday night, the Golden Knights won in spectacular fashion when Jack Eichel scored on the power play with only 5.2 seconds remaining to defeat the Ottawa Senators 2-1.

"It's great, you can feel it," Eichel said. "It's the first time that I've been in this situation like this where every game means something."

Eichel joined the Golden Knights in a trade with the Buffalo Sabres in November. Now that his back has healed, the dividends are beginning to show with three goals and three assists in nine games with Vegas.

"There's a handful of guys that can corral a puck, get it off that quickly and stick it in the back of the net in that spot in the world and he's one of them," Vegas head coach Peter DeBoer said. "That's exactly why you go get him."

Vegas goaltender Robin Lehner was stellar with 39 saves on his way to the 150th win of his career.

Between solid goaltending and Eichel's emergence, the Golden Knights are showing they could be a tough team to beat down the stretch.

"I think when you look around the league, if one goalie at one end is outplaying the goalie at the other end or even, you've got a chance to win," DeBoer said. "And if he's not, you're gonna be in tough this time of year. I thought their goaltender was excellent, and I thought Lenny went toe-to-toe with him and was great and that's what we need."

The Golden Knights' stop in Philadelphia will be the first of a five-game road trip.