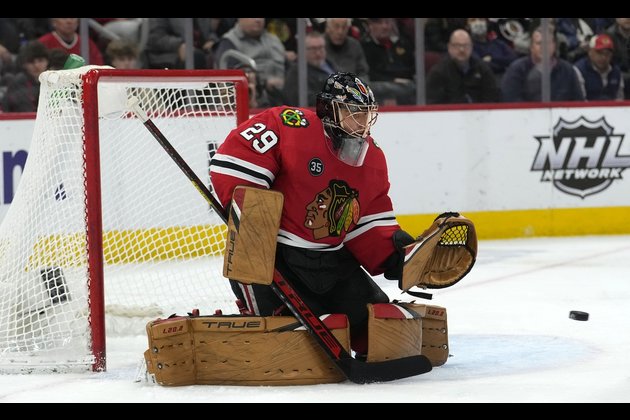 Marc-Andre Fleury is scheduled to make his team debut for the Minnesota Wild when they face the Columbus Blue Jackets on Saturday night in Saint Paul, Minn.

Fleury, 37, is a three-time Stanley Cup champion and the reigning Vezina Trophy winner as the NHL's top goaltender. The Wild acquired him from the Chicago Blackhawks at the Monday trade deadline in exchange for a conditional second-round pick in this year's draft.

The opportunity to join a contender is reinvigorated, according to Fleury. He posted a 19-21-5 record with a 2.95 goals-against average and a .908 save percentage in 45 games, all starts, with Chicago this season.

"Everybody knows that we're going to try to make a run here, and it's exciting," Fleury said. "Everybody's excited. It's a well-balanced team, and it will be fun to watch."

Minnesota is looking for its fifth consecutive win after posting victories over the Boston Bruins, Chicago, the Vegas Golden Knights and the Vancouver Canucks. The Wild outscored those foes 13-5.

Meanwhile, Columbus hopes to bounce back on short rest after a 4-3 overtime road loss against the Winnipeg Jets on Friday night. Brendan Gaunce, Adam Boqvist and Oliver Bjorkstrand scored for Columbus, with Bjorkstand forcing OT with a goal 14 seconds from the end of regulation. However, Winnipeg's Nikolaj Ehlers netted the winner 21 seconds into the extra period.

The Blue Jackets are 1-2-1 in their past four contests.

Elvis Merzlikins stopped 29 of 33 shots in the loss against the Jets. He could start between the pipes once again, or the Blue Jackets could turn to backup J-F Berube.

Merzlikins said he did not want fatigue to serve as an excuse with fellow goaltenders Joonas Korpisalo and Daniil Tarasov sidelined due to injuries.

"I have to understand that feeling, the tiredness, and battle through that tiredness and play well," he said. "I think it's going to be a great experience and learning process right now."

However, all eyes will be on the Wild's goaltending crease when the puck drops.

A year ago, Fleury helped Vegas knock off Minnesota in seven games during a first-round playoff series. Fleury's coaches and teammates are glad he is on their side now.

"He just makes clutch saves and momentum saves that could be changing the game, but he swings it back the other way because of his ridiculous saves," Wild forward Marcus Foligno said. "He beat us in that first round, and it's definitely great to have him as a teammate now."