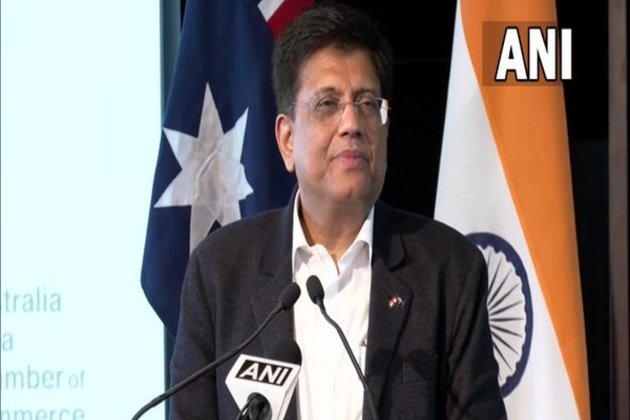 Melbourne [Australia], April 6 (ANI): Highlighting the unity and shared commitment between India and Australia for expanding the Business ties, Union Commerce Minister Piyush Goyal said that India provides transparency, trust, rule of law, democracy to strengthen the trade relations, adding that the relations between the leaders and bond of friendship of both countries will pave the way for future ties.

Goyal is on a three-day visit to Australia lauded the business communities for contributing and collaborating with IndAus Economic Corporation Trade Agreement.

Attending India-Australia Economic Corporation Trade Agreement in Melbourne, Goyal said, "The cooperation which we seek from you (Australia) and the final collaboration is evident in the IndAus ECTA Agreement is truly a labour of love for all of us. Most importantly, for all that Dan "(Australian Trade Minister (Dan Tehan) and I could do-- its very important to recognize the huge contribution that each and every one of you from business world played. The way you gave us the input, help us understand the potential of this relationship. The kind of confidence exuded by business persons both from India and Australia, that this relationship is good for us, the way you eased the typical roadblocks. Big Thank You goes to each and every one of you for your cooperation.

Further, he focused on two important elements of the IndAus agreement - the relationship between top leaders of both nations and bonds of friendship.

"The new collaboration with Australia-India Chamber of Commerce and the Confederation of Indian Industry-- one cannot but recognize two very important elements to this agreement, which I believe have been the defining features which made it happen within a short span of time. One, of course, is the deep relationship that former Australian Prime Minister Tony Abbott and Prime Minister Narendra Modi struck off way back in 2014 when Abbot first came to India in New Delhi," said Goyal.

"By sheer luck, I was there dressed formally thinking about what to say to him, Abbot then asked me to arrange a Yoga session with PM Modi. I have never felt comfortable with a leader of his stature from the word go. The seeds of partnership were made during that visit.PM Modi and Abbott struck off a fabulous relationship, over the years it has blossomed," said the Union Commerce Minister.

He said that the second element that led to the signing of the trade deal was the bond of friendship between the two nations.

"The second element is deep bonds of friendship, brotherhood and the trust that Prime Minister Scott Morrison and PM Modi have built over the last few years in challenging times -- the geopolitical situation is not the most promising right now, particularly for both our countries in our neighbourhood and with our trading partners of today," said Goyal.

Referring to the present situation, he said, "The world is going through tumultuous times, we have been grappling with COVID-19 and other situations which are the cause of serious concerns for all of us. But within those boundaries of problems, India and Australia have demonstrated the unity of mind, purpose and a shared commitment to come together, expand our people-to-people relations, expand our business relations, and strengthen the political partnership of the two leaders and our two governments."Talking about the competitive nature of the two countries, Goyal gave the example of cricket, he said, " Maybe at some stage move from the competitor spirit of cricket to collaboration in cricket," adding jokingly that he is "not suggesting joint Indo-Australian team. But, certainly, we would love to see this relationship grow over the years."Taking a dig at China, Goyal said, "We offer you transparency, trust, rule of law, democracy, both members of Commonwealth, two nations who love sports."He said that he was tempted to reset the target of USD 50 billion to USD 100 billion between Australia and India trade.

"As Minister Tehan said, we have started with modest targets of about USD 50 billion, we should not aim for anything small. You mentioned the figure of trade with China, I am tempted to reset, now USD 100 billion looks small," said Goyal.

The newly signed trade pact with Australia is expected to take bilateral trade from the existing USD 27 billion to nearly USD 45-50 billion in the next five years and the government expects one million jobs to be created in India in the next four to five years.

Both countries inked the India-Australia Economic Cooperation and Trade Agreement (ECTA) on April 2.

ECTA is the first trade agreement of India with a developed country after more than a decade and provides for an institutional mechanism to improve trade between the two countries. (ANI)