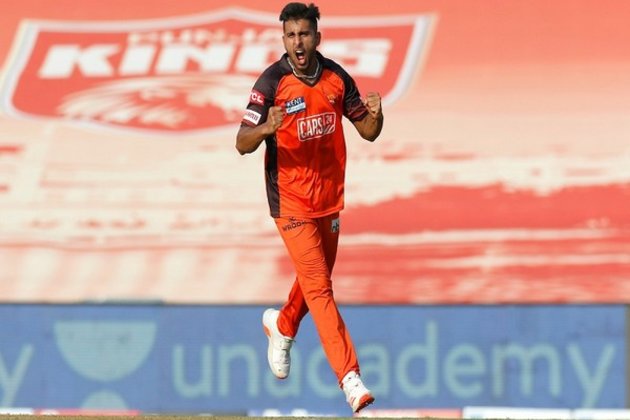 Cricket greats like Ian Bishop, Sunil Gavaskar, and Dale Steyn are excited to watch this seamer from Jammu and Kashmir do so well in the tournament, and everyone is of the view that he has a bright future ahead.

Umran started his IPL stint as a net bowler for Sunrisers Hyderabad is now a vital cog in the team's pace attack. On 'Cricket Live' on Star Sport, the 22-year-old narrated how his family supported him. While giving a peek at his formative years, the right-arm quick revealed that he earned a reputation in his neighbourhood with his natural ability to bowl at a genuine pace.

"I always got the support from my family to play cricket. My father is a vegetable vendor in Jammu and he's worked very hard in our upbringing. I grew up playing in the neighbourhood at Tawi Ground and impressed the seniors there with my fast bowling. The clubs used to call me to play for them whenever a big team was visiting, and I would win matches for them. So it all started from there," he said.

While speaking about how he came in the eyes of state selectors, Umran said: "I used to get scared thinking about trials as I hadn't even played at district level so, I never went for the trials. But I made up my mind and went for JK U-19 trials. The selectors were surprised after I bowled the first delivery. They asked me who I was and how I could bowl so fast. From then on, my journey in professional cricket began."Former West Indies cricketer Ian Bishop has been watching Umran since his IPL debut last year and the legendary pacer believes if he keeps himself fit, he'll play for India.

Bishop said, "I've been excited about this guy since I saw him bowl last year. Genuine pace, you cannot go to a supermarket and buy that. You can train someone to master line and length but can't teach someone how to bowl fast. He's bowling with hostility which means even the best of batters will be uncomfortable facing him.""He scares you the same way Lockie Ferguson and Jofra Archer do, and Dale Steyn loves him. It's just fascinating to me what Umran Malik can become. If he stays fit, he's going to play for India and international cricket. I would also repeat how many Umran Malik's around this vast nation are yet to be discovered," the West Indian added.

Former India captain Sunil Gavaskar is impressed with Umran's pace and accuracy. The batting great claimed the right-arm quick is going to play for India.

Gavaskar said: "Umran Malik has been very-very impressive with his speed but more than his speed, it's his accuracy (that's impressed). A lot of guys who bowl at that speed tend to spray the ball around but Umran bowls very few wide deliveries.""If he can control the wides down the leg side, he will be a tremendous bowler because that will mean he'll be attacking the stumps all the time, and with his pace, it's not easy to hit straight. If he bowls wicket-to-wicket, he's going to be pretty much an unplayable bowler. He's going to play for India," he added.

Legendary South Africa pacer Dale Steyn - who has intimidated even the best of batters with his fiery bowling - is mentoring Umran in the SRH.

Steyn said on Umran: "My job with Umran is to ensure he runs fast and make players play differently. My job is to try and make him forward-thinking as to what the batters are planning on doing. It's exciting for us to sit back and watch what a genius he is. I don't want to turn him into what I was, all I want is his geniuses to come out."Former India fast bowler Irfan Pathan - who has mentored Umran during his stint with Jammu and Kashmir Ranji side - also spoke highly of the young talent.

Irfan - who is the only India pacer to pick up a hat-trick in the first over of a Test match - said, "If a bowler has that extra pace then a batter is never comfortable facing him. The more he plays, the better he will get. If you observe his front foot, it stays very straight and also the follow-through is impressive.""His run-up is fantastic. All this will take him the distance. He made his debut in first-class cricket and that must have given him some experience of bowling with the red ball. Umran is also special because despite bowling at such a pace he's looking to try and get the ball to swing. Just look at the seam position with which he releases the ball. He is a special player," Pathan added. (ANI)