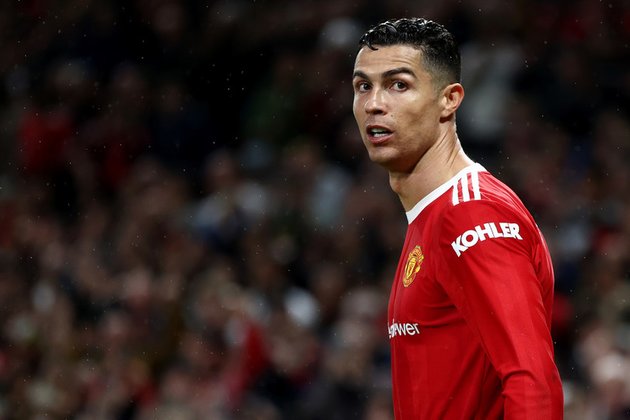 Manchester United forward Cristiano Ronaldo is on course to top another goalscoring chart after notching his 14th strike of the season at Old Trafford in his side's 3-0 win over Brentford on Monday.

Ronaldo became the Premier League's highest home goalscorer this season by netting a penalty after being brought down by Rico Henry.

This also moved him within one strike of Son Heung-min of Tottenham and four behind Liverpool ace Mohamed Salah in the Golden Boot race, with two games of the season remaining for sixth-placed Champions League qualification hopefuls United.

Ronaldo is said to have mouthed "I'm not finished" during a lap of honor to thank fans following the Red Devils' final home game of the season.

Shortly after, the 37-year-old Man of the Match received backing from interim coach Ralf Rangnick who suggested that the incoming Erik ten Hag should keep the five-time Ballon d'Or winner amid reports the new manager views Ronaldo as an unnecessary luxury player.

"The way we played again tonight, not only because he scored [as] he also won the penalty and helped defensively, why should he not be part of the squad and help the team?" asked Rangnick of the club legend who still has another term to run on his two-year contract.

"But this is a question you have to ask Erik and also Cristiano," Rangnick insisted.

Furthermore, the German also has an opinion on where the Portuguese superstar, who rejoined his first foreign club from Juventus last summer, should play if Ten Hag does decide to take a punt on him.

"Cristiano is not a central striker," Rangnick claimed. "He does not want to play in that position but if you look at international football there are not many teams who play with two strikers."

"For me, it is a question of what players Manchester United have in the future. It is obvious United need two more quality strikers," Rangnick went on.

"Modern strikers do not necessarily have to be strikers. Liverpool or Manchester City have five or six top-class strikers. If you ask me if Gabriel Jesus or Jack Grealish is a winger or a striker, they can all play there."

"Mason Greenwood would have been one," Rangnick said of the youngster currently battling legal troubles, "then after the West Ham game he was no longer part of the squad. Anthony Martial was on loan and Edinson Cavani injured."

About to hand over the reins to Ajax tactician Ten Hag, and step aside into a consultancy role while also managing the Austrian national team, Rangnick confessed to not being "completely happy" with his six months in charge since succeeding Ole Gunnar Solksjaer, with United set to finish yet another campaign trophyless.

"I would have expected to qualify for the Champions League, that was the goal we had," he revealed, as United currently trail fourth-placed Arsenal in the last qualification spot by five points while the north Londoners have two games in hand.

Before finishing, however, Rangnick tipped Ten Hag to return United to the glory years enjoyed under Sir Alex Ferguson.

"It's obvious that quite a few players will leave the club, so there will be the need for new players, for top-quality players, and I strongly believe that, if everybody works together on this process, we can raise the level and bring Manchester United back into spaces and areas where they should be," he said.

Over on Instagram, Ronaldo addressed match-going fans before his 437 million followers and thanked them "once again" for "great support from the stands".

"Let's take this opportunity of our last game of the season at Old Trafford to thank our amazing supporters, who endured a difficult season by our side and never abandoned us. Thanks, guys.

"Your support means the world to us and our goal is to become better everyday, so that we can achieve what we all want: glory for Man United!" he concluded.

Next up for Rangnick's men before 2021/2022 draws to a close are away dates at Brighton and Crystal Palace.