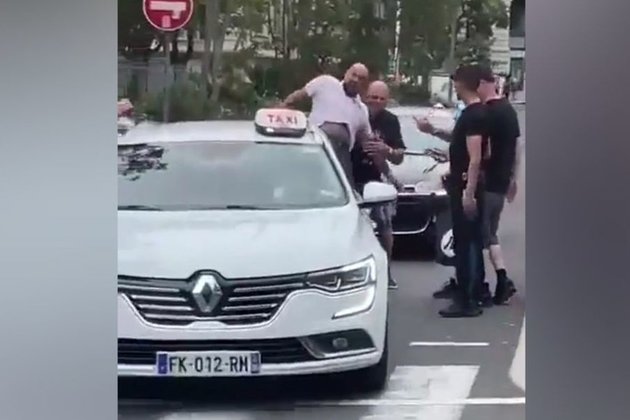 Boxing heavyweight world champion Tyson Fury has been caught kicking out at a taxi while appearing to be drunk on holiday in the south of France.

A Russian-speaking voice is heard narrating the clip from a distance in Cannes, with Fury oblivious to being filmed.

In the footage, the stumbling 'Gypsy King' is led to a grey Renault taxi at a pedestrian crossing by his father John.

Joined by another man in their entourage, he and Fury seemingly attempt to negotiate a ride with the driver and unsuccessfully open the back door.

Deciding that he doesn't want the fare, the driver then rolls off as Fury, restrained by John, kicks out at the car's rear.

While Fury was criticized on Twitter by some, he found praise from those others who said that the champ "does what he wants".

"This is just a normal down-to-earth guy who's doing what most men do on holiday. Proper people's champion," claimed one compliment.

Seeming to have come round, Fury took to Instagram stories early on Thursday to upload a video of himself and John pounding the streets of Cannes.

"Nice run this morning, dad, through the city," Fury says to the camera. "Back at it, [to] sweat them few sherbets out," he adds in reference to alcohol.

"Too many we had last night," Fury confesses. "Strong beer though wasn't it, Dad?" he asks John, to which the elder Fury confirms: "Strongest I've had."

Fury claims to have retired after knocking out Dillian Whyte at Wembley last month, telling Piers Morgan: "This is the truth, the gospel truth, nothing but the truth... I'm done."

"You know, every good dog has its day and like the great Roman leader said, there's always be somebody else to fight," the Mancunian went on.

"When is enough enough? I'm happy, I'm healthy. I've still got my brains, I can still talk. I've got a beautiful wife, I've got six kids. I've got umpteen belts, I've got plenty of money. Success, fame, glory."

Yet Fury could still return to the ring in a bid to become the undisputed champion of the heavyweight division once more by meeting and beating WBA, IBF, WBO, and IBO ruler Oleksandr Usyk.

Before signing on the dotted line anywhere, though, Fury must wait to see who prevails in a rematch between Usyk and Fury's British rival Anthony Joshua, which is set to be signed any day now.