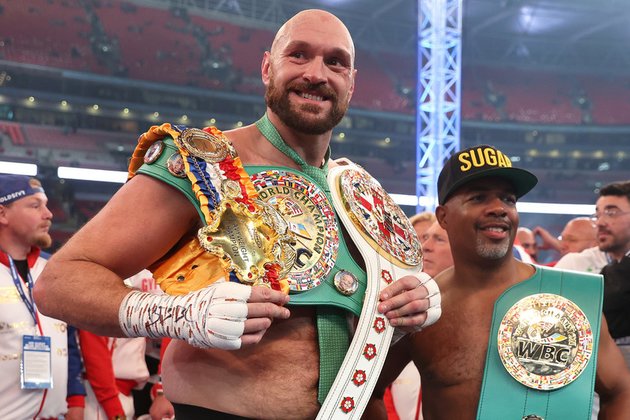 Tyson Fury will 'unretire' when he gets presented with a big fight, according to Bob Arum

Tyson Fury could be set to return to the ring according to his US promoter Bob Arum, who claimed that the 'Gypsy King' will once again return to boxing if and when he is presented with a blockbuster fight.

The undefeated champion announced that he was stepping away from the sport in the aftermath of his one-sided beatdown of English heavyweight Dillian Whyte earlier this year, but his decision came as a disappointment to many fight fans who were anticipating a winner-takes-all matchup between Fury and the winner of the forthcoming rematch between Oleksandr Usyk and Anthony Joshua.

Fury had previously stepped away from the sport following his title win against Wladimir Klitschko several years ago only to return and reclaim his status as the world's best heavyweight, thanks in part to a trilogy of fights against American slugger Deontay Wilder.

A showdown with fellow Brit Joshua has been talked up as being potentially the biggest money-spinning bout available to Fury now - and Arum suggests that his fighter could be persuaded to make a comeback once the dust settles in the heavyweight division this summer.

"Tyson Fury is retired and he will be retired until we come to him with the next big event and then he will unretire," Arum told Fight Hype.

"Well, I think Fury is going to wait to see how the [Anthony] Joshua fight comes out with [Oleksandr] Usyk, and then he'll make a determination whether he wants to continue. Other than fighting the winner of Joshua-Usyk, there's really nothing that's really of interest to Tyson Fury, so we will have to see."

Fury, meanwhile, has stoked rumors of a comeback by refusing to vacate his world titles, even after revealing his retirement plans - with WBC president Mauricio Sulaiman apparently more than content to allow the champion fighter time to reflect on his future.

"We're going to give him the time he needs to reflect, to relax, he just did the mandatory of the division," said Sulaiman to Planet Sport.

"There's no hurry to pressure him or his team into making any decisions. We will be in communications, he's having a holiday with his family."

Fury, though, has indicated that while he considers his career as a ranked prizefighter over and done with, he will consider taking on exhibition challenges in much the same way that fellow undefeated star Floyd Mayweather has done since his final career bout against Conor McGregor in 2017.

UFC heavyweight champ Francis Ngannou has been talked up as a potential opponent in what would be an intriguing clash of the heavyweight champions of two different combat sports codes - with Ngannou even appearing in the ring with Fury following his win against Whyte in April.