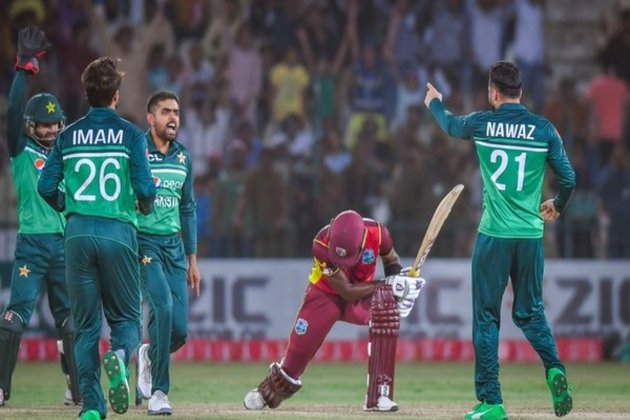 Multan [Pakistan], June 11 (ANI): Pakistan skipper Babar Azam heaped praise on Mohammad Nawaz for his 'outstanding' bowling which guided the team to a massive 120 runs victory against West Indies in the second ODI in Multan on Friday.

With the win, Pakistan claimed an unassailable 2-0 lead over West Indies in their three-match ODI series.

"Nawaz was outstanding, he picked wickets at crucial moments. We were under pressure after the first 10 but really happy with the way we fought back," Babar Azam said in a post-match presentation.

During the second ODI Babar Azam reached another massive feat in men's international cricket history as he became the first batter to score nine consecutive half-centuries in all three formats of cricket.

Pakistan skipper scored 77 off 93 balls in the second ODI match against West Indies and added yet another fifty-plus score to his name to enter the record books for a massive batting record.

"The wicket was double paced, our plan was to build partnerships. The ball was spinning as well. We were 10-15 short because we lost back-to-back wickets. We wanted to save Khushdil for the end that's why we sent him later. We were confident at the break that we could defend this," he added.

Talking about the match, Pakistan put a total of 275/8 all thanks to Babar (77) and Imam-ul-Haq (72), as well as the lower-middle order who hammered the visitors all around the ground.