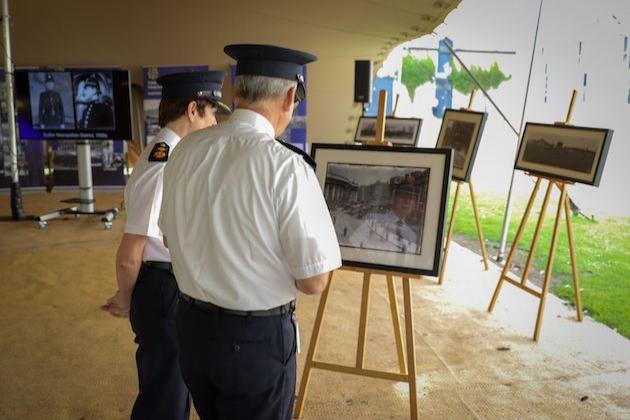 DUBLIN, Ireland - An Garda Siochana on Wednesday launched its Garda Centenary Online Photographic Archive 1922 to 2022 as part of its current centenary celebrations.

In 2002, thousands of historical photographs captured by the formerly known Garda Photographic Section were discovered, and work began on their conservation and restoration.

When discovered, the images were on fragile glass plate negatives, mainly 6 X 4 inches in size having been placed in storage in 1979. It required painstaking work to digitise them.

These significant photographs which document important periods both in Irish history and in the evolution of An Garda Siochana through the decades, have now been made available to view online in one place.

It is the first time that the photographs will be available to and viewed by the public.

For close to a century, Garda Forensic Photographers recorded the photographic evidence of serious crime scenes for investigative purposes, but they also captured the more informal aspects of the organisation as well. The social and recreational activities, informal gatherings of colleagues and their families as well as the day-to-day work of gardai in communities across Ireland have also been captured.

The photographs include events of major national and international prominence including the Eucharistic Congress of 1932, the inauguration of Ireland's first President Douglas Hyde in 1938, and the visit of Queen Elizabeth II in 2011.

The Garda Centenary Online Photographic Archive 1922 2022 can be accessed here.

"During this centenary year, we are launching a photographic archive that will help preserve and visually present the evolution of our police service over the past 100 years," Garda Commissioner Drew Harris said at the launch on Wednesday at the Royal Hospital Kilmainham.

"The foundation of An Garda Siochana as Ireland's unarmed, national police and security service was a pivotal moment in Irish history, and the photographs now available on our online archive ensure that they are in permanent record for generations to come," Harris said,