Scottie Scheffler in the driver's seat at Tour Championship 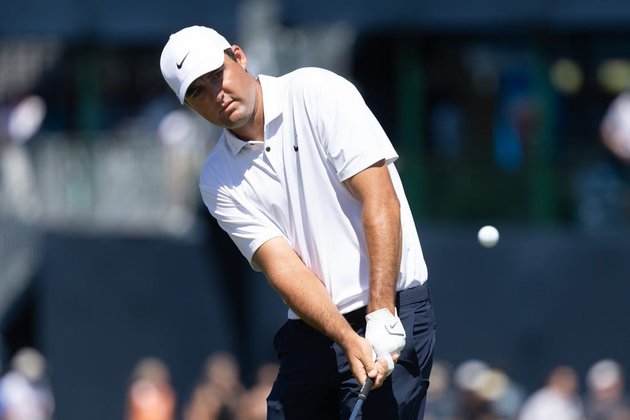 Patrick Cantlay would become the first player to capture back-to-back FedEx Cup titles if he wins the season-ending Tour Championship, which begins Thursday at East Lake Golf Club in Atlanta.

First, the reigning champ will have to chase down Scottie Scheffler, who will open the tournament at 10under par with a two-stroke advantage over Cantlay.

Scheffler's memorable four-win season, which included a victory at the Masters, put him in first place in FedEx Cup points, leading to his two-shot edge in the Tour Championship's staggered scoring format.

Cantlay will start at 8 under and the rest of the field will be even further behind; from those starting positions, whoever wins the Tour Championship wins the FedEx Cup, too.

"It's definitely a bit different," Scheffler said. "I think what's going to probably work best for me is to look at it like a four-day event and really ignore the starting strokes deal and kind of go out there and do my thing and see where it puts me at the end of four days."

Only the top 30 players qualify for the Tour Championship, but 29 will be on the course this week after Will Zalatoris withdrew due to herniated disks in his back. Zalatoris won his first PGA Tour title in the first leg of the playoffs, the FedEx St. Jude Championship, and would have started just behind Scheffler and Cantlay at East Lake.

That could open the door for Xander Schauffele, who will begin the tournament in the third slot at 6 under. Schauffele won the Tour Championship in 2017, before the present scoring system tied it directly to winning the FedEx Cup, and he posted the best 72-hole aggregate score in 2020 but tied for second.

Everyone in the field has a theoretical chance to win but hardly an equal opportunity. Sam Burns will begin in fourth place at 5 under. Open champion Cameron Smith of Australia -- likely making his final PGA Tour start before his reported defection to LIV Golf -- will begin at 4 under along with Tony Finau, Northern Irishman Rory McIlroy, Sepp Straka of Austria and Sungjae Im of South Korea.

Two more 2022 major winners, Justin Thomas and England's Matt Fitzpatrick, are lurking behind at 3 under with Jon Rahm of Spain, Rookie of the Year favorite Cameron Young and Scott Stallings.

The players are vying for the $18 million winner's share of the Tour Championship purse. Second place pays $6.5 million, with $5 million to the third-place finisher.

The championship marks the finale of a tumultuous season for the PGA Tour, which is trying to win court cases and battles of public opinion against the Saudi-financed LIV circuit. PGA players still hope to keep the focus on the course.

"I'd say it's a nice finishing touch for our year to come to East Lake," Schauffele said. "It's a ton of history on property here, a ton of history made I guess for our tour, as well, with some of the finishing stretches and ups and downs and how people have played."

Cantlay captured the golf world's attention when he defeated Bryson DeChambeau in a playoff at the 2021 BMW Championship to launch into the top spot at East Lake, where he fended off Rahm with his clutch putting. Cantlay won last week's BMW to become the first player in the FedEx Cup's 16-year history to successfully defend his title at a playoff event.

"I think at the end of your career you'll look back and say, 'I wish I would have won every FedEx (I) had a chance to win,' because it's a big tournament and the fact that it's a year-long race I think means a little bit more," Cantlay said. "Back-to-back doesn't do anything more, but two is a lot better than just one."