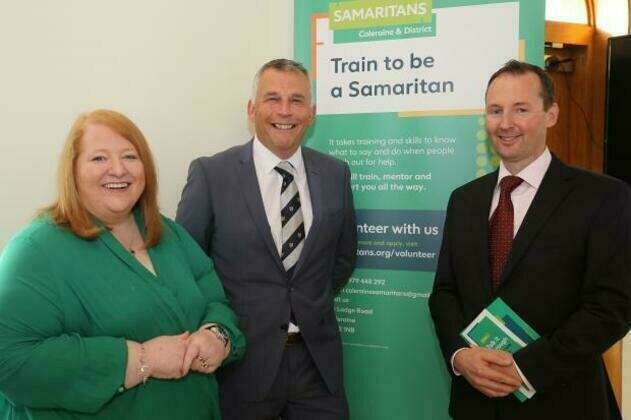 Marking 20 years of the Samaritan's Listener scheme at Magilligan Prison, the Minister praised the charity for its life-saving work with prisoners going through a difficult time and in training others to do the same.

Listeners are specially trained prisoners who offer confidential emotional support to their peers who may be struggling to cope or have suicidal feelings. Prior to the Covid pandemic Listeners in Northern Ireland's prisons spoke with 1,600 fellow prisoners in emotional distress.

Speaking at a 20th anniversary celebration event at Magilligan Prison, Naomi Long said: "The work by Listeners and Samaritans volunteers across the prison system over the last two decades has been life-saving. By treating prisoners with dignity and respect, and helping to improve their mental health and emotional well-being, we now have a much safer custody environment.

"I want to congratulate the Samaritans for 20 years of service to our prisons. It is poignant that we mark this special anniversary during Prisons Week in which we reflect on all those affected by prisons; prisoners and their families, victims of crime and those working in the criminal justice system."

Mark Kennedy Assistant Director of Samaritans said: "Research shows that prisoners are more vulnerable to self-harm and are 8-10 times more likely to die by suicide than the rest of the population, which is why the unique service is invaluable to both prisons and inmates.

"We believe that by giving prisoners a chance to talk through their feelings and by supporting and training some prisoners to become Listeners, it can make a real difference to the choices they make both in prison and upon release."

Speaking about his time as a Listener, a prisoner at Magilligan, said: "Being in prison can be very frightening, particularly if you feel like nobody cares. I wanted to try and help in some small way. When someone writes to say that they wouldn't be here now if it wasn't for my help then you know you've achieved that, but I've got several years of my sentence left and I hope I can continue to be a Listener for all that time. I know that it will help me a better person when I am released as well."