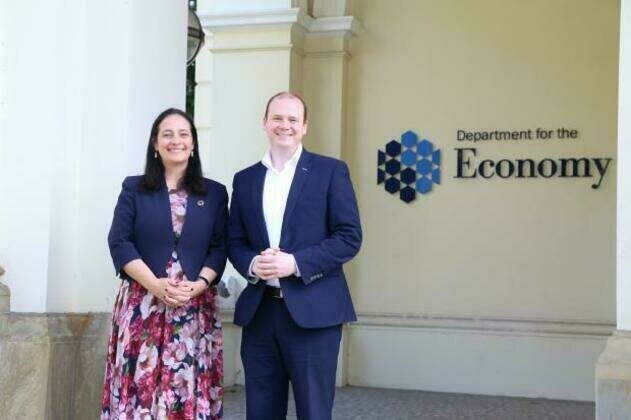 The Economy Minister, Gordon Lyons has met with the Irish Minister for Tourism, Culture, Arts, Gaeltacht, Sport and Media, Catherine Martin T.D. to discuss a potential joint bid to host the opening stages of a future Tour de France.

The Ministers discussed the potential tourism, sports and wider benefits of the event and they have today submitted an expression of interest in the formal bidding process to the Tour organisers.

Officials in both Departments will now work together to investigate the potential to host the event in either 2026 or 2027.

Economy Minister Lyons said: "Securing the opening stages of the Tour de France would be a fantastic opportunity for Northern Ireland to feature on the world stage and add to the growing list of major sporting events that have come here in recent years.

"People will fondly remember the success of the Giro d'Italia 'Big Start' in 2014, and I am confident that together we would be able to successfully host the Grand Depart.

"Major events such as this not only bring about huge economic benefits but give us a tremendous opportunity to showcase everything that is great about Northern Ireland."

Minister Martin added: "Hosting the world's greatest cycle race would be an exciting opportunity for the island of Ireland.  I was delighted to meet Minister Lyons again during my recent trip to Belfast and to agree to express a joint interest in hosting three full stages for Le Grand Depart of the Tour de France, ideally in 2026 or 2027.

"Our shared experience in hosting major sports events, our cooperative approach in marketing the entire island of Ireland as a tourism destination, and the wonderful scenery and cead mile failte that awaits visitors to Ireland could all combine to create an amazing all-island event. This collaborative process has my full support, and I will engage with colleagues across Government on this in the coming weeks."