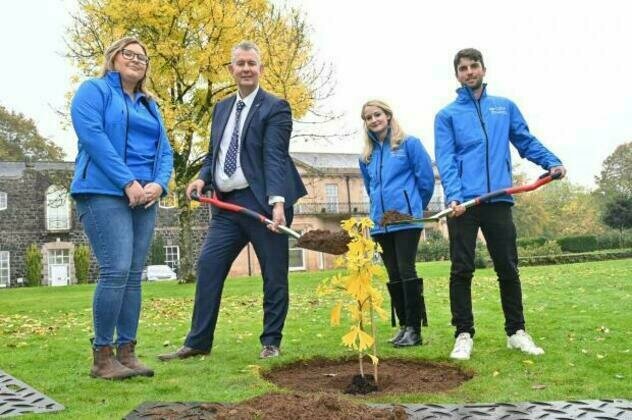 The sapling planted by the Minister was grown from seed sent to CAFRE in early 2020 by the Green Legacy Hiroshima (GLH) Initiative. The Initiative is based in Hiroshima in Japan and promotes a message of peace and the resilience of both mankind and nature.

These incredible trees were growing within 2 kilometres of the atomic bomb that was detonated over the Japanese city of Hiroshima on 6 August 1945 killing an estimated 140,000 people. It was believed that nothing would grow in the city for decades to come but new green shoots grew from the trees in the months after the bomb, giving hope to the citizens of Hiroshima. Only 170 Survivor Trees survived the explosion, of which 160 still grow in Hiroshima today.

The College initially became involved to inspire and engage students during the COVID pandemic with a horticultural project that would allow them to use their knowledge and skills in connection with a worthy cause.

Minister Poots said: "I am delighted to be able to plant this Ginkgo biloba tree, at Greenmount today. The Green Legacy Hiroshima Initiative is a fantastic project and I commend everyone involved.

"The participation of CAFRE students in a project such as this shows them that a career in horticulture not only allows them to contribute to their local economy and green environment, but also the social wellbeing of their communities. Producing CAFRE graduates with an international outlook and passion for sustainability is key to creating a resilient economy and healthy environment in Northern Ireland.

"It gives me great pleasure to also present a survivor tree from this excellent project to Local Councils from across Northern Ireland, and I hope that these trees will be a sign of hope and peace for everyone."