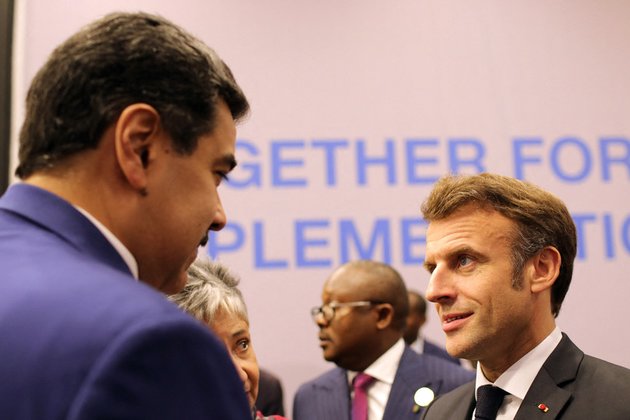 Paris had recognized US-backed ?interim president? Juan Guaido as the leader of Venezuela in 2019

France and Venezuela could have better bilateral relations, French President Emmanuel Macron told his counterpart, Nicolas Maduro, on the sidelines of the climate-change summit in Egypt.

Just three years ago, Macron had recognized a different person, Juan Guaido, as the leader of Venezuela.

Monday's brief interaction occurred during the UN's COP27 climate event in Sharm El-Sheikh, according to the Venezuelan news outlet Telesur, which published footage of the Macron-Maduro chat.

In the video, Macron assessed that Latin America was "putting itself back together" and expressing a wish to discuss how France could play a more positive role on the continent. He addressed the Venezuelan leader as "president."

"At your service. Our delegate to the conference is Jorge Rodriguez. You can talk to him with absolute confidence," Maduro responded. He stressed that the delegate served as the president of Venezuela's National Assembly.

Rodriguez assumed that position in January last year, though his claim on it is disputed by none other than Juan Guaido. The US-backed politician claims to be the "interim president" of Venezuela as well as the head of its legislative body. France was among the nations that recognized Guaido as such.

Guaido, previously a little-known politician, was elected speaker of the National Assembly in January 2019, amid the opposition-dominated parliament's stand-off with the Maduro government. He stated then that Maduro was an illegitimate leader after allegedly rigging the 2018 election, and laid his claim to the presidency based on Venezuelan laws on succession of power.

The attempted coup was supported by Washington and its allies. Macron formally recognized Guaido as "acting president" in February 2019.

The politician launched several attempts to effectively seize power in Venezuela, appealing to the country's military to back him, and none succeeded. Guaido claims still that he heads the National Assembly of Venezuela, despite having boycotted the Caracas-organized parliamentary elections in December 2020.

The EU stopped recognizing him as anything more than an opposition politician in January 2021. The bloc did not recognize the newly-elected National Assembly as legitimate.