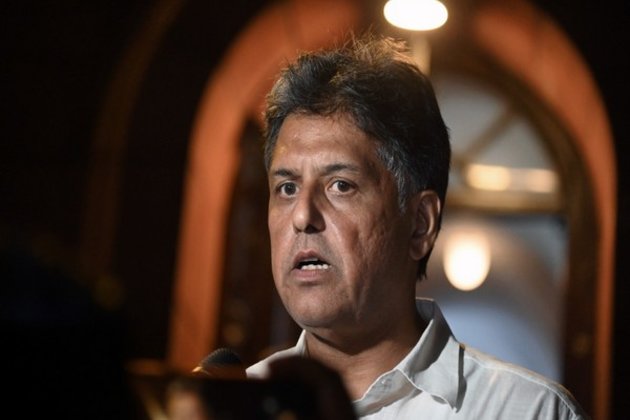 New Delhi [India], December 3 (ANI): A day after Vice President Jagdeep Dhankhar made observations over the judiciary, Congress MP and former union minister Manish Tewari on Saturday said that there has been a concerted attempt by the Centre to delegitimise the decision-making process of the higher judiciary.

In a series of tweets, Tewari said, "I am surprised at Vice President Jagdeep Dhankhar's rather vitriolic diatribe against the NJAC (National Judicial Appointments Commission) judgement of the Supreme Court. As a lawyer, he understands that in our Constitutional scheme, Courts are final arbiters of laws even those passed unanimously by legislature.""First, Law Minister Kiren Rijiju and now Jagdeep Dhankhar. There seems to be a concerted attempt to delegitimise the decision-making process of the higher judiciary. Judges are not infallible but if the government has a problem with NJAC judgement being a new law before Parliament. What is the rationale in attacking the judiciary, withholding judicial appointments unless this is a softening-up exercise for something portentous in the works? The stage for a larger executive-judiciary confrontation is being set. It does not auger well for our Constitutional design," Tewari said.

Vice President Dhankhar on Friday at an event in New Delhi said that the judiciary cannot become the legislature or executive as any incursion by one organ into the domain of the other can upset the apple cart of governance.

"Our judiciary being one of the critical institutions of governance cannot be the executive or legislature. The doctrine of separation of power is fundamental to our governance. Any incursion, howsoever subtle, in the domain of the other by one has the capacity or potential to unsettle the apple cart of governance," Dhankar said while speaking at the Dr LM Singhvi Memorial Lecture on 'Universal Adult Franchise: Translating India's Political Transformation Into A Social Transformation'.

Earlier in October, emphasizing the need for reforms in judicial appointments, the Union Law Minister Kiren Rijiju had said the procedure of the Collegium system is very opaque and there exists "internal politics" in the judiciary.

Speaking at an event in Ahmedabad, the Union Minister said, "The Constitution is the most sacred document. We have three pillars including the legislature, executive and judiciary... I feel the executive and legislature are bound in their duties and the judiciary improves them. But the issue is that when the judiciary goes astray, there is no system to improve them."On judicial activism, Rijiju had said, "When we brought the National Judicial Appointment Commission, it was challenged and the Supreme Court struck it down. If there is no system to regulate the judiciary then the term judicial activism is used. Many of the judges have observations but those do not include part of their order. They express their thoughts through observations. There are also objections against these observations in society. It would be good if judges give their observations through their orders."Rijiju had said he observed that on several occasions judges go beyond the limit of duties and tend to do executive functions without knowing the ground realities.

"When the judiciary goes beyond its limits...Judges are not aware of the practical difficulties or the financial conditions. It will be good if people remain focused on their respective duties. Otherwise, people may also say that we are doing executive activism," the Law Minister had said.

Notably, the Supreme Court Collegium is presided over by the Chief Justice of India and consists of the four senior-most judges of the court. Though the government can raise objections or seek clarifications with respect to the recommendations of the Collegium, the government is bound to approve the names if the five-member body reiterates them.

He said as per the spirit of the Constitution, appointing judges is the job of the governmentRijiju had said, "Supreme Court expanded the collegium system in 1998. Nowhere in the world judges make appointments of judges. The primary duty of judges is the delivery of justice."The Minister had said he has observed that half the time judges are busy deciding appointments, thereby affecting their primary job of "delivering justice".

"Now I have observed that more than half of the time, judges spend time in appointing judges instead of delivering justice. The internal politics of the judiciary is not seen from the outside. There are intense deliberations. Sometimes even groupism also happens. The procedure is very opaque, and not transparent. If judges play the executive role, then it would be reviewed," Rijiju had said.

In 2014, the National Democratic Alliance government brought the National Judicial Appointments Commission (NJAC) Act in an attempt to change the system of appointment of judges.

The NJAC was a proposed body, which would have been responsible for the appointment and transfer of judges to the higher judiciary. The NJAC Act and the Constitutional Amendment Act came into force on April 13, 2015. But the top court on October 16, 2015, struck down the NJAC Act. The verdict brought back the primacy of the collegium system of judges appointing judges. (ANI)