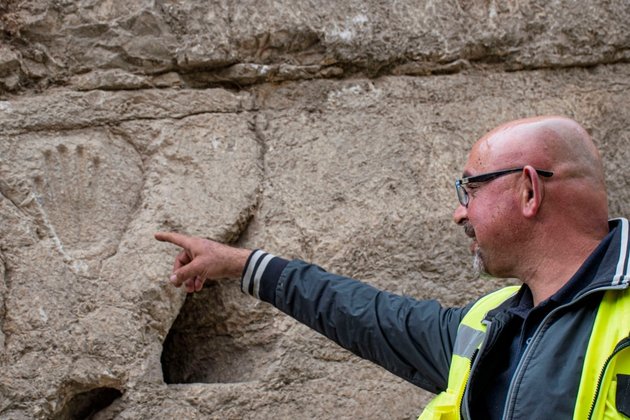 Israeli archaeologists said Wednesday that they are trying to uncover the meaning of a recently discovered hand imprint carved into the stone wall of an ancient moat outside Jerusalem's Old City.

The imprint, which may been made as a 'prank', was found in a thousand-year-old moat exposed during works to expand a road in Israeli-annexed east Jerusalem near Herod's Gate, the Israeli Antiquities Authority said.

The massive moat was hewn into the stone around all of the Old City, stretching 10 meters (33 feet) across and between two to seven meters deep and, unlike typical European ones, not filled with water.

According to the IAA, Crusaders in 1099 needed five weeks to cross it and breach the city's walls and defenses

While the moat's function was clear, the hand's meaning was elusive.

'It's a mystery, we tried to solve it,' IAA's excavation director Zubair Adawi said in a statement.

IAA archaeologists remained uncertain who carved the hand into the rock or its significance.

The moat and hand have meanwhile been covered to enable the continued infrastructure works just below the walls that currently surround the city, built in the 16th century by Suleiman the Magnificent.