World has started to look at India with new sense of respect: President Murmu 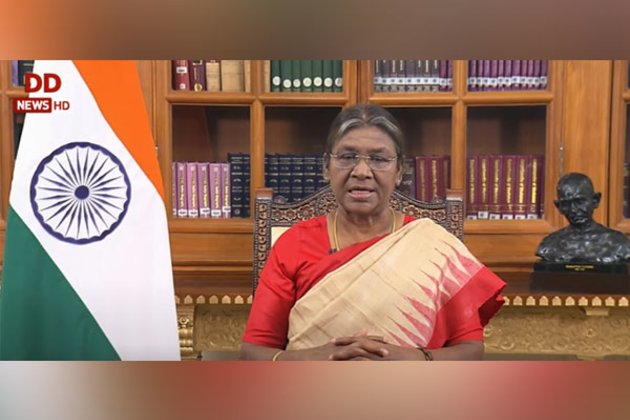 New Delhi [India], January 25 (ANI): Noting that the world has started to look at India with a new sense of respect, President Droupadi Murmu on Wednesday said that the country's interventions in various world forums have started making a positive difference.

In her address to the nation on the eve of 74th Republic Day, the President referred to India's Presidency of G20 and said the premier forum for international economic cooperation is the ideal platform to discuss global warming and climate change.

She said most sectors of the Indian economy have shaken off pandemic effects and India has been among the fastest growing economies.

The President said that in India's mission of 'Sarvodaya', the most encouraging has been the progress made on the economic front. Referring to the challenges posed by COVID-19, she said that the country soon came out of economic downturn and resumed the growth saga guided by "our able leadership and driven by our resilience".

"Last year, India became the fifth largest economy in the world. It needs to be underlined that this achievement comes against the backdrop of high economic uncertainties around the world. The pandemic has entered the fourth year, affecting economic growth in most parts of the world. In its initial phase, Covid-19 also hurt India's economy badly. Yet, guided by our able leadership and driven by our resilience, we soon came out of the downturn, and resumed the growth saga.

"Most sectors of the economy have shaken off the pandemic effect. India has been among the fastest-growing major economies. This has been made possible by timely and pro-active interventions from the Government. The 'Atmanirbhar Bharat' initiative, in particular, has evoked great response among people at large. There have also been sector-specific incentive schemes," she said.

The President said it is a matter of great satisfaction that those on the margins have also been included in the schemes and programmes and they have been helped in tiding over difficulties.

She referred to 'Pradhan Mantri Garib Kalyan Anna Yojana' and other measures taken by the government for the benefit of the poor during the challenges posed by COVID-19.

"With the economy on a sound footing, we have been able to begin and carry forward a series of praiseworthy initiatives. The ultimate goal is to create an environment in which all citizens can, individually and collectively, realise their true potential and prosper. As education builds the right foundation for this purpose, the National Education Policy has introduced ambitious changes," she said, adding that National Education Policy appreciates the role of technology in expanding and deepening the learning process.

"As we have come to realise since the early days of Covid-19, technology offers life-changing possibilities. The Digital India Mission is striving to make information and communication technology inclusive by bridging the rural-urban divide. More and more people in far-flung places have been reaping the benefits of the internet and are receiving a variety of services provided by the government, as the infrastructure expands.

"We have reasons to be proud of our achievements in the domain of science and technology. India has been among the handful of pioneers in space technology. As long-pending reforms in this sector are underway, private enterprises are now invited to join the quest. The 'Gaganyaan' program to carry Indian astronauts into the space is under progress. This will be India's maiden human space flight. Yet, even as we reach out to the stars, we keep our feet on the ground," she said.

The President said India's Mars Mission was powered by a team of extraordinary women, and "our sisters and daughters are not far behind in other areas too.""Women's empowerment and gender equality are no longer mere slogans, as we have made great progress towards these ideals in recent years. With people's participation in 'Beti Bachao, Beti Padhao' campaign, women's representation has been rising in every sphere of activity.

"During my visits to various states, educational institutions and while meeting delegations of various professionals, I am amazed by the confidence of young women. I have no doubt in my mind that they are the ones who will do most to shape tomorrow's India. What miracles cannot be achieved if this half of the population is encouraged to contribute to nation-building to the best of their ability?" she said.

The President said the same vision of empowerment guides the Government's approach to the marginalised communities including the Scheduled Castes and Scheduled Tribes.

She said the respect that India has earned on the world stage has resulted in new opportunities as well as responsibilities.

"As a result of a series of initiatives in recent years to transform all aspects of governance and unleash creative energies of people, the world has started to look at India with a new sense of respect. Our interventions in various world forums have started making a positive difference."She said India's G20 presidency is an opportunity to promote democracy and multilateralism and the right forum for shaping a better world and a better future.

"Under India's leadership, I am sure, G20 will be able to further enhance its efforts to build a more equitable and sustainable world order. As G20 represents about two-thirds of the world population and around 85 per cent of global GDP, it is an ideal forum to discuss and find solutions for global challenges. To my mind, global warming and climate change are the most pressing among them"She said global temperatures are rising and incidents of extreme weather are increasing.

"We are faced with the dilemma: To lift more and more people out of poverty, we need economic growth, but that growth also comes from fossil fuel. Unfortunately, the poor bear the brunt of global warming more than others. Developing and popularising alternative sources of energy is one of the solutions.

"India has taken a commendable lead in this direction by giving a policy push to solar energy and electric vehicles. At the global level, however, emerging economies need a helping hand from advanced nations in the form of technology transfer and financial support," she said.

The President said that to maintain the balance between development and environment, there is need to look at the ancient traditions with a new perspective.

"We need to reconsider our basic priorities. The scientific aspects of traditional life-values have to be understood. We must, once again, rekindle that respect for nature and humility before the vast universe. Let me state here that Mahatma Gandhi was a true prophet of our times, as he foresaw the calamities of indiscriminate industrialization and cautioned the world to mend its ways. We need to modify our lifestyle if we want our children to live happily on this fragile planet."The President said one more year has gone by for the Republic and another year commences.

"It has been a time of unprecedented change. With the outbreak of the pandemic, the world had changed within a matter of days. During these three years, whenever we have felt that we have finally put the virus behind, it raises its ugly head. However, there is no need to panic because we have learned in this period that our leadership, our scientists and doctors,our administrators and 'Corona Warriors' will make every possible effort to meet any situation. At the same time, each of us has also learned to not let our guard down and remain alert."The President said generations of people working in different fields deserve praise for their invaluable contribution in the development story of the Republic so far.

"I commend the roles of farmers, workers, scientists and engineers whose combined strength enables our country to live up to the spirit of "Jai Jawan, Jai Kisan, Jai Vigyan, Jai Anusandhan". I appreciate every citizen who contributes to the nation's progress. I also convey my greetings to our diaspora, the great ambassadors of India's culture and civilisation."The President conveyed her special appreciation to jawans who guard borders and are ready to make any sacrifice for the country.

"I also express my appreciation for all the brave soldiers of paramilitary forces and police-forces who provide internal security to their fellow citizens. I salute all the brave-hearts of our armed forces, paramilitary-forces and police-forces who laid down their lives in the line of duty. I convey my blessings to all the dear children for their bright future."She said from the day the Constitution came into effect to the present day, it has been an amazing journey that has inspired many other nations.

"Every citizen has reason to be proud of the Indian Story. When we celebrate the Republic Day, we celebrate what we have achieved, together, as a nation."She said the Constitution is inspired by the humanistic philosophy of the oldest living civilisation in the world as well as new ideas that emerged in more recent history.

The President said India has been transformed from a largely poor and illiterate nation into a confident nation marching on the world stage.

"This would not have been possible but for the collective wisdom of the Constitution-makers guiding our path. While Babasaheb Ambedkar and others gave us a map and a moral framework, the task of walking that path remains our responsibility." (ANI)