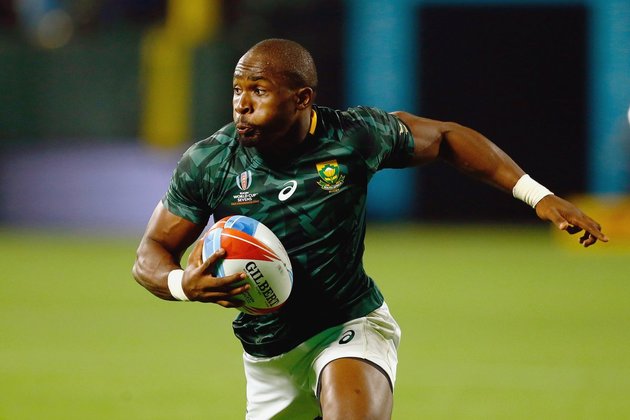 Cape Town - Siviwe Soyizwapi will captain the Springbok Sevens team at the Hong Kong Sevens next weekend after being named leader of the pack for the seventh tournament of the World Rugby Sevens Series.

The 26-year-old winger takes over the captain's armband from Philip Snyman, who is still busy with recovery protocols following a head knock in Vancouver, and will return to the Far East with good memories, having made his Blitzboks debut at the Hong Kong National Stadium in 2016.

Since then, Soyizwapi represented the team in a total of 24 World Rugby Sevens Series tournaments and scored 77 tries in 124 matches. In fact, the Maclear-born speedster is the leading try-scorer in the team this season, with 21 tries.

A Hong Kong debut is also on the cards for 20-year-old Angelo Davids, who was named on the wing in place of injured Muller du Plessis, as Springbok Sevens coach Neil Powell was forced into three changes from the squad that returned from Vancouver as Canada Sevens champions earlier this month.

With Snyman out of action, Ryan Oosthuizen comes back into the starting team. Oosthuizen was in the squad that played in Las Vegas, but picked up a hamstring injury at the Nevada event and missed the tournament in Canada.

JC Pretorius, who made the Dream Team in Vancouver, will also miss out due to injury. Powell moved Werner Kok to the forwards for this trip and Kok's regular slot out wide will be taken by Kurt-Lee Arendse, who travelled to Canada as a replacement, but was called into the team for the last two matches at BC Place and will now make a first trip with the team as a playing member.

Chris Dry, who missed the North American leg of the World Series due to injury, is fit again and will fly east with the team on Saturday as back-up.

According to Powell, the tournament victory in Vancouver will provide the Blitzboks with some momentum.

"In the ideal world the same squad would have travelled to Hong Kong, but we had to replace three players due to injury," said Powell.

"That created special opportunities for 'Shakes' and Angelo, who will debut as captain and player respectively. 'Shakes' was identified as a future leader and made part of the leadership group before the season started and he led the team admirably in those final two matches in Vancouver - I am confident that he will continue to do so.

"Angelo has been part of the SA Rugby Sevens Academy for the last two years and played very well on their recent trip to South America. He is a hard worker and very coachable, so I have a lot of confidence in his ability. He is fast and great on defence, and will fit into the team culture with ease."

For Soyizwapi the captaincy has brought a smile to his face, but also a huge amount of pride: "Luckily the rest of the players in the leadership group are around and there are a number of very experienced guys in the squad and I have their support.

"I never expected to captain the side to be honest, it is a massive honour and a responsibility I hope to fulfil with pride and ability. I made my debut in Hong Kong as a player, scored my first try there and now will be captain for the first time there as well," he said.

The Springbok Sevens' Pool A fixtures: