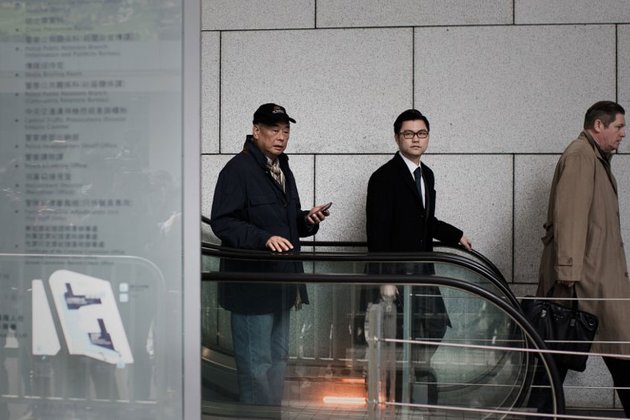 The Washington meeting came a day after an estimated half a million people took to the streets of Kowloon in a bid to explain to visiting citizens of mainland China why the planned amendments to the Fugitive Offenders' Ordinance have met with mass opposition and widespread public anger in Hong Kong.

"The two had a constructive discussion about the situation in Hong Kong, human rights, and the broader context with China and Taiwan," said Mark Simon, an executive with Next Digital.

Lai, the founder and chairperson of Next Digital, "thanked Secretary Pompeo for the administration's concern with human rights, and encouraged continued international attention to Hong Kong and the promises the Chinese government has made," said Simon.

Next Digital is a Hong Kong-listed media company which publishes the pro-democracy tabloid Apple Daily, a strong critic of China's policies in Hong Kong.

State Department spokesman Morgan Ortagus said in a statement that Pompeo and Lai "discussed developments related to amendments to Hong Kong's Fugitive Offenders Ordinance and the status of Hong Kong's autonomy under the 'One Country, Two Systems' framework."

There were no details from Lai's meeting with Pence.

Sunday's mass protest in Hong Kong was the latest in a wave of large demonstrations against the amendments, which are widely seen as a threat to Hong Kong's way of life, which was supposed to have been protected by the "one country, two systems" framework under which the former British colony was handed back to China in 1997.

If they become law, the city could lose its status as a separate legal jurisdiction and trading entity, while journalists, visitors, rights activists, dissidents, democratic politicians, and members of the business community could be targeted for words and actions deemed illegal by Chinese authorities, and extradited to face trial in Chinese courts.

In June, Hong Kong chief executive Carrie Lam, in response to protests, angered opponents of the amendments to the Fugitive Offenders Ordinance, saying that they would be postponed, rather than completely withdrawn.